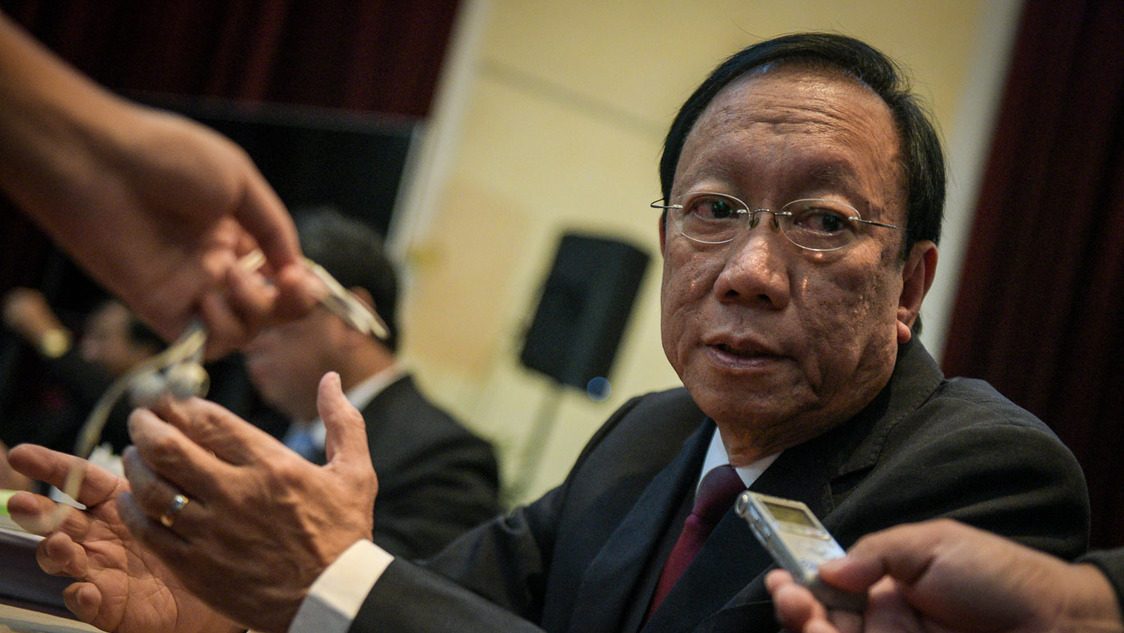 Facebook Twitter Copy URL
Copied
(2nd UPDATE) Calida has found a way to use the press' favorite defense against itself. It is uncharted territory and 'confusing at best,' says constitutional law professor Dan Gatmaytan. 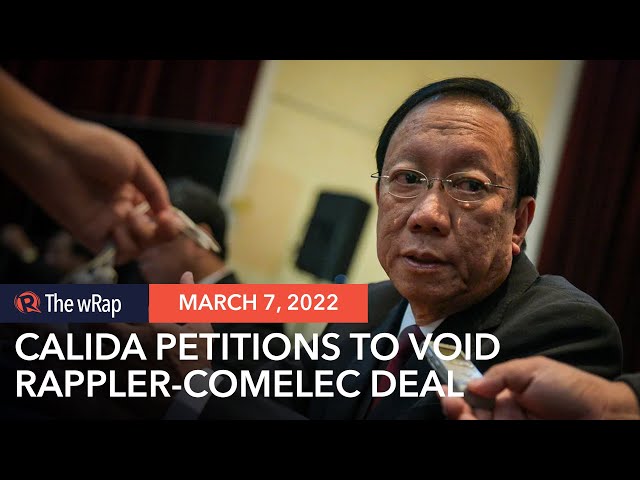 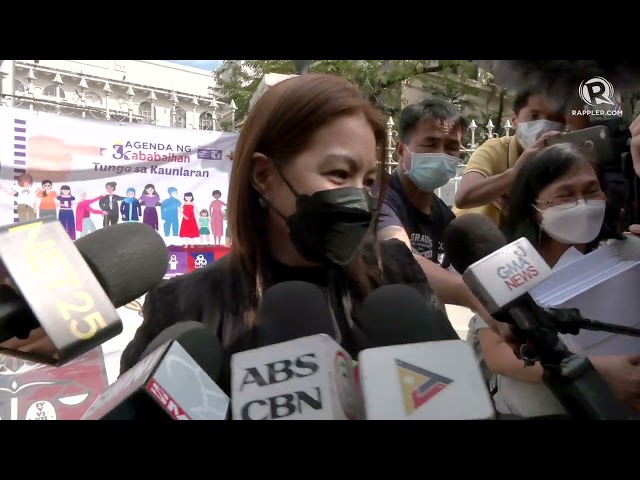 “Such power granted by Comelec in favor of Rappler clearly constitutes prior restraint on freedom of speech and of expression,” said the press release from the Office of the Solicitor General (OSG). Rappler has not received a copy of the pleading from the OSG.

“Rappler’s fact-checking under the Memorandum of Agreement likewise violates the Constitutional prohibition on prior restraint…The matter of fact-checking has become highly contentious as it may result [in] monopoly of truths,” Calida said in his letter to the Comelec seeking an injunction on the deal.

Calida had earlier written Comelec to unilaterally rescind the agreement with Rappler by Friday, March 4, or else he would go to the Supreme Court by March 7. Calida kept his promise.

The Comelec, for its part, doubled down on the fact-checking agreement.

“We cannot do anything but face the music, answer the petition, and defend the MOA that we signed with Rappler,” acting Comelec chairperson Socorro Inting said.

“We entered with an agreement with Rappler freely and voluntarily. It underwent review by the law department. If the court finds the MOA to be infirm, we cannot do anything. We have to respect the law,” she added.

Calida’s pleading makes novel use of the constitutional principle of prior restraint, which in general, protects free expression from government restrictions.

For example, when the National Telecommunications Commission (NTC) issued a statement warning media not to publish the Hello Garci tapes during the Arroyo electoral scandal, the Supreme Court ruled the warning constituted unconstitutional prior restraint.

Prior restraint in general means prohibiting content even before it is published or broadcast. Our laws and jurisprudence say free speech must be so fiercely protected that the government can only regulate it if the said content poses a clear and present danger – for example, saying in a rally that people should detonate a bomb.

Here, Calida is telling the Supreme Court that when Rappler, or anyone for that matter, fact checks, they are prohibiting the publication of fake content. It is like saying: if Rappler fact checks, the peddler of fake news is stripped of the right to express himself or herself. That, for Calida, is unconstitutional prior restraint, and it is unchartered territory.

The fact-checking mechanism, by media or anyone else, as massive disinformation networks threaten democracies around the world, has not been fully ventilated in constitutional litigation. Calida has found a way to turn the press’ favorite defense against itself.

Constitutional law professor Dan Gatmaytan told Rappler on Monday, March 7, that the claim about the Comelec-Rappler MOA being unconstitutional because it is a form of “prior restraint” is confusing at best.

“According to the Supreme Court, “prior restraint” refers to official governmental restrictions on the press or other forms of expression in advance of actual publication or dissemination. Generally, it means freedom from government censorship of publications, whatever the form of censorship, and regardless of whether it is wielded by the executive, legislative or judicial branch of the government,” Gatmaytan said.

He added: “Any law or official that requires some form of permission to be had before publication can be made, commits an infringement of the constitutional right. The MOA does not constrict the press in any way.”

Calida’s first public statement against the Rappler-Comelec deal was made on the same day that the Marcos camp also called it out.

This is not the first time both acted in sync, as they also filed on the same day motions that sought to inhibit Associate Justice Marvic Leonen from Marcos’ electoral protest against Vice President Leni Robredo – a case that Calida helped Marcos with, even if it meant the Office of the Solicitor General (OSG) taking a position different from the Comelec’s, its statutory client.

Calida has been able to use laws creatively to silence political dissenters and even oust a chief justice outside of the constitutionally-preferred impeachment. Calida’s shenanigans had been slammed as weaponization of laws, but he’s been largely upheld by a Supreme Court filled with appointees of his boss, President Rodrigo Duterte.

Calida also tried to shut down news giant ABS-CBN via quo warranto, but the Supreme Court acted passively on ABS-CBN cases, letting them become moot. It meant the House of Representatives having unrestrained power to kill ABS-CBN’s franchise, taking them off free channel up to now.

Rappler had earlier gone to the Supreme Court to challenge the constitutionality of President Rodrigo Duterte’s coverage ban on Rappler journalists, but it remains pending with the High Court after nearly three years.

For the most part, Calida’s argument is that Rappler has no legal entity.

Citing the Corporation Code, Calida said that Comelec as a government instrumentality is now trapped in the agreement, and may be dragged into future legal suits against Rappler.

“The Commission may be barred from denying Rappler’s corporate existence in a suit brought against Rappler. In such a case, all those who benefitted from the transaction made by Rappler and the Comelec, despite knowing the legal defects, may be held liable for the contract,” said Calida.

The Securities and Exchange Commission, as prompted by Calida, revoked Rappler’s license in 2018, ruling that foreign investment through Philippine Depositary Receipts (PDRs) of American philanthropist Pierre Omidyar amounted to “some foreign control.” Media companies should be 100% Filipino-owned. Rappler, however, is not the only media entity that has used PDRs as financial investment instruments.

Later in 2018, the Court of Appeals issued a decision agreeing with the SEC that the Omidyar PDRs amounted to some foreign control.

But as SEC itself has long acknowledged, its decision is not final and executory until a court says it is. The case remains pending with the CA.

Didn’t the CA already decide this in 2018? What Calida always leaves out is that the meat of the CA’s ruling was to remand the case back to the SEC, urging it to give Rappler the grace period to correct its mistake, which is allowed by the Corporation Code.

In that same decision, the appellate court said that when Omidyar donated the PDRs to Rappler’s Filipino managers, the problem “appears to have been permanently removed.”

The SEC, however, did not budge. It has triggered a new round of deliberations by the CA.

Comelec spokesperson James Jimenez earlier said that while the court resolves the issue, the commission does not see any reason why it shouldn’t recognize Rappler as a legitimate news entity.

Calida also said that the partnership for MovePH to disseminate election FAQs was overly broad as the agreement “lacks a clear set of qualifications of the persons who will comprise MovePH so as to ensure that these persons are impartial and non-partisan.”

Even Rappler’s election microsite was slammed by Calida because the deal supposedly does not have a provision that says Comelec will vet what Rappler will post. “This grants Rappler an unbridled discretion on what information it may post regarding a candidate,” said Calida.

Calida did not show up on Monday, and neither did he send his lawyers to file. Instead, he sent two administration staff who could not answer questions, nor give a copy of the petition. – with reports from Dwight de Leon/ Rappler.com