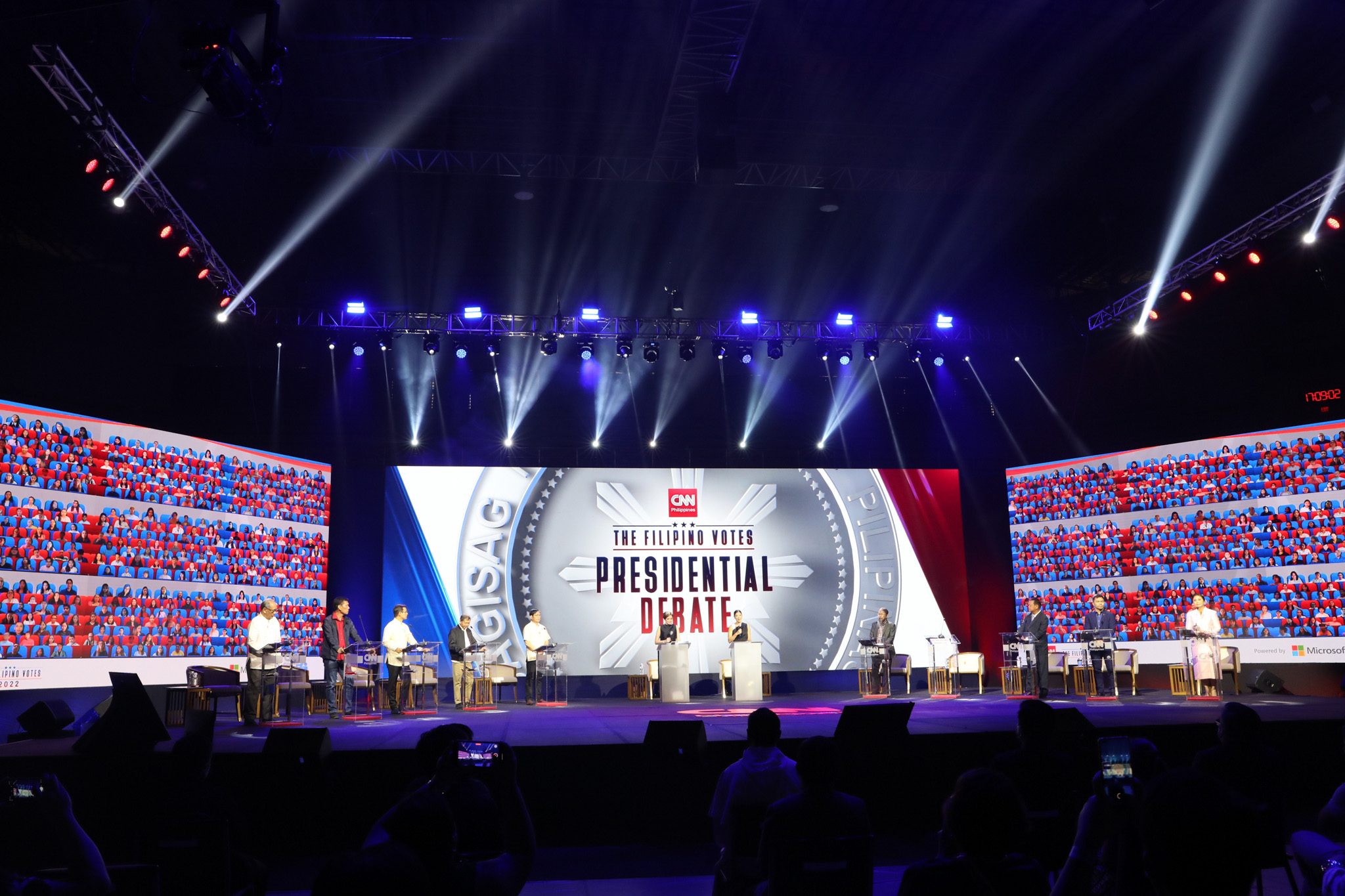 Facebook Twitter Copy URL
Copied
Candidates are forced to explain previous claims and some show proof of acts done (literally, in the case of one bet)

MANILA, Philippines – For the first time since candidacies were filed, 2022 presidential bets (except the debate-averse Ferdinand Marcos Jr), faced off in person during the CNN Philippines’ presidential debate on Sunday, February 27, at the University of Santo Tomas in Manila.

Each was given a minute and a half to respond to a question.

Here are highlights from the hours-long event:

How the candidates fared

Rappler reporters who trail the three bets in the 2022 polls noted that they came prepared and were able to clarify their plans and talk about their track record despite time constraints.

Robredo, the sole woman in the presidential race, narrated in breathless speed the Office of the Vice President’s activities in the days leading to and immediately after the first Luzon lockdown caused by COVID-19. Read more from Mara Cepeda’s report here.

Lacson stuck to his strengths as a longtime senator and former chief of the national police: highlighting budget reform, pledging to weed out corruption in government, and stressing the value of managing resources. The short time allotment didn’t give Lacson enough time, however, to explain his plans the way he usually would. Rambo Talabong lists down Lacson’s plans based on previous announcements and engagements.

De Guzman, meanwhile, banked on the years he has spent bargaining with management and speaking at protest rallies as he sparred with fellow candidate Jose Montemayor Jr. on labor rights. After De Guzman spoke of his labor-first policy, Montemayor interjected and asked De Guzman if he also cared about employers. Read a recap of the exchange from Jairo Bolledo here.

Manila Mayor Isko Moreno, dressed to the nines in a long-sleeve barong, mostly played it safe during the debate but found himself on the defensive again when asked about his unspent 2016 campaign funds. Moreno came prepared, bringing with him a literal receipt of the taxes he had paid for the funds that he declared as income. Pia Ranada has more about how the Manila mayor performed in the debate here.

Senator Manny Pacquiao did fine in the debate – except when he had to explain his stance against same-sex civil unions and divorce. The senator struggled as he tried to explain, within a minute and a half, why his stance had not changed. Aika Rey has more about the senator’s performance.

Among the lesser known presidential bets, it was the multi-hyphenated Montemayor (throughout the debate, he said he was a doctor, an economist, and a lawyer), who, at best, had wrong takes (on national debt) and, at worst, seemed to have either misunderstood the news or consumed disinformation (he insisted, wrongly, that Moreno had gotten $15 million in campaign funds from Bill Gates). Dwight de Leon reports on how Faisal Mangondato, Ernesto Abella, and Norberto Gonzales fared during the debate.

Here are other stories and videos you shouldn’t miss, if you want to make better sense of the hours-long debate: