LOYAL TO PING. Vicente Sotto III (shown in this file photo from his proclamation rally on February 8, 2022) says he can't picture himself working with another president but his standard-bearer, Ping Lacson. Angie de Silva/Rappler

Facebook Twitter Copy URL
Copied
Sotto presents himself as a veteran public servant, playing key roles when the national government dealt with the pandemic, China, and other crises. Then comes Walden Bello, who tells him, ‘Stop rewriting history.’

MANILA, Philippines – Vice presidential candidate Vicente Sotto III’s alliance with President Rodrigo Duterte, seen to have secured his stay as Senate president, boomeranged on him during the election debate mounted by CNN Philippines on Saturday, February 26.

Sotto held a commanding start during the vice presidential debate, consistent in bringing up his decades of experience and his platform with his presidential candidate Senator Panfilo Lacson. But that was until his fiery opponent, economist and professor Walden Bello, started bringing up the controversial legislations that the Duterte administration was able to pass because of his cooperative chamber.

Asked what Cabinet position he would seek if he won as vice president, Sotto picked two: secretary of the Department of the Interior and Local Government and chairperson of the Dangerous Drugs Board. He fashioned himself as the obvious choice, having been a vice mayor, and an author of the 2002 Dangerous Drugs Act. He also served as DDB chief from 2008 to 2009.

When it came to pandemic response, Sotto reminded viewers that he was instrumental in passing the aid-focused Bayanihan 1 and 2 laws. Seeing the country spend billions for vaccines, he proposed looking instead for preventative drugs abroad to stop the fiscal bleeding.

When the issue of the West Philippine Sea was raised, Sotto had his sleeve Senate Bill 2289, which aimed to define maritime zones so that the Philippines was aligned with the United Nations Convention on the Law of the Sea.

Sotto’s narrative was clear: he was a veteran public servant, with a career that peaked as the Senate President under Duterte, playing key roles when the national government dealt with the pandemic, China, and other crises. 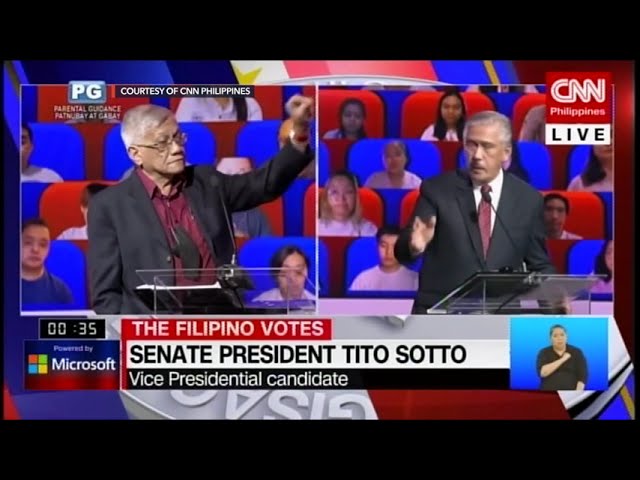 Bello stripped the parts of the story that Sotto glossed over. He pointed out that, being the Senate President, Sotto was an accomplice in the President’s legislative agenda, including the controversial ones.

Sotto and Lacson are running on the same key platforms that catapulted Duterte to Malacañang, namely the promise to curb corruption and illegal drugs. They had mostly supported policies of the Duterte administration, but turned critical as the 2022 elections came closer. (READ: In campaign launch, Lacson and Sotto say ‘enough’ of Duterte)

Bello linked Sotto to the feared anti-terror law and the lowering of requirements for foreign investors, which the economics professor characterized as a policy that left Filipino businesses helpless against foreigners.  Bello also slammed the Senate President for not standing up enough for detained opposition Senator Leila de Lima.

Earlier in the debate, other candidates also said Bayanihan 1 and 2 were far from enough in helping Filipinos rise from the pandemic.

Sotto fumbled at the start, and was pushed enough to a corner that he retorted the laws he was being slammed for were not decided by him alone, but by the Congress as a whole. He only later gained momentum, standing by the anti-terror law and asking, “Would you rather that we were allied with terrorists?”

Sotto also defended the lowering of requirements for foreign investors, saying it was necessary for picking up the economy from the pandemic slump.

With regards to De Lima, Sotto advised Bello to “ask De Lima herself” how Sotto stood by her. (READ: Sotto to PNP: Allow De Lima to hold committee hearings in jail)

Sotto’s answers were all boosted by a live audience audibly cheering him on as he tried to tame Bello, who continued to dress him down until the end.

Down to his final statement, Sotto sought to keep his image as an established public servant, but it was clear that for the evening, he had lost his balance, and was remembered for being on the defensive.

“I have built consensus with 23 republics as president of the Senate for almost four years. We believe in our competence, our experience,” Sotto said. – Rappler.com