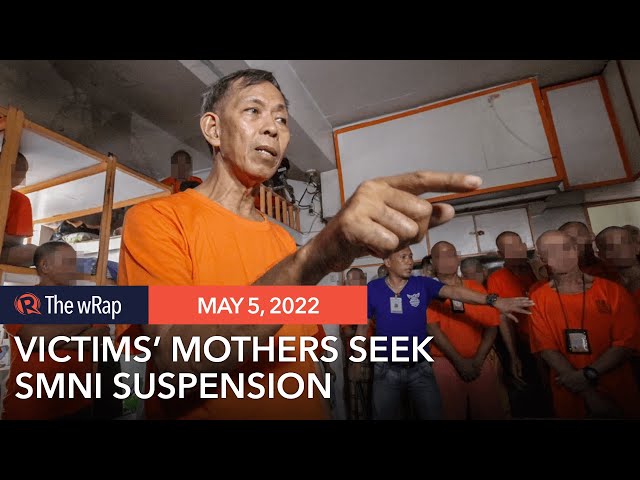 MANILA, Philippines –  The mothers of disappeared students Karen Empeño and Sherlyn Cadapan filed a complaint with the National Telecommunications Commission seeking to suspend or revoke the principal license and impose a cease and desist order against the Apollo Quiboloy-owned SMNI, after the network aired an interview  aimed at “vindicating” the convicted military general Jovito Palparan.

The Empeño and Cadapan matriarchs filed the complaint on Wednesday, May 4, along with Karapatan Secretary-General Cristina Palabay.

In the 16-page complaint, they argued that a two-hour  interview with Palparan – who was convicted of kidnapping and serious illegal detention for the disappearance of UP student activists in 2007 – was a violation of the 2007 Broadcast Code of the Philippines and Republic Act No. 11422, which granted a franchise to the Swara Sug Media Corporation. “SMNI  abused  its franchise  and/or  authority or  certificate of public convenience and necessity (CPCN) given to it by this Honorable Commission  by  publicly  airing  the interview with Palparan despite the baseless accusations and red-tagging of the latter,” they said. A CPCN is the principal license that the NTC issues to telecommunications companies for operation.

The mothers of disappeared UP students added that by broadcasting the interview with National Task Force to End Local Communist Armed Conflict (NTF-ELCAC) spokesperson Lorraine Badoy and Palaparan, SMNI misused its platform “or  at  the  very  least,  allowed, deliberately  or  otherwise,  others to  use  its facilities to propagate false news or information.”

Badoy is facing multiple complaints at the Office of the Ombudsman over her red-tagging spree across sectors. During the interview, Palparan portrayed himself as a victim of communists.

“We  are utterly appalled  and disturbed  that a franchise  grantee and/or  holder  of  a CPCN such as SMNI which is tasked with the responsibility of disseminating true and/or accurate information and balance programming, among others, has the temerity to make such broadcasts which are accessible to and watched by the viewing public,” they said.

On March 30, SMNI aired a two-hour interview with Palparan to aid the Duterte government’s publicity campaign against activists, seeking to paint the convicted general as a victim. The moms of the activists and the lawyers have slammed this interview as a “cheap shot.”

The interview with Palparan took place without the knowledge of both prosecutors and the lower court. Palparan was convicted in 2018 by a court in Bulacan of kidnapping and serious illegal detention over the disappearance of Empeño and Cadapan. He was sentenced to 40 years in prison, and has begun serving that sentence at the New Bilibid Prison in Muntinlupa.

“Wherefore we are executing this Complaint and attest to the truth of the foregoing in order to commence a complaint against Suwara Sug Media Corporation for its violation of the franchise and/or Certificate of Public Convenience and Necessity issued in its favor and for the suspension or revocation of said Certificate of Public Convenience and  Necessity,” the complainants said.

“We likewise  pray  for  the  immediate issuance of a cease and desist order as provisional relief against SMNI and/or Suwara Sug Media Corporation,” they added.

‘It’s none of your business’

Asked to comment on the matter, SMNI president Marlon Rosete told GMA News, “It’s none of your business.”

The complaint against SMNI filed at the NTC comes after the National Union of Peoples’ Lawyers (NUPL)  filed a request with the Court of Appeals (CA) to hold in contempt of court those behind the interview with Palaparan.

The NUPL said a 2000 operations manual of the Bureau of Corrections says an interview request of a convict may be denied if he or she has a pending criminal case. Palparan, aside from his 2018 conviction, has a pending separate case for kidnapping and serious illegal detention and serious physical injuries filed against him by Raymond Manalo before the Malolos RTC Branch 19.

Because of the pending case rule, the NUPL said “the request for media interview by SMNI of appellant Palparan should not have been granted, but denied outright.” – with reports from Lian Buan/Rappler.com