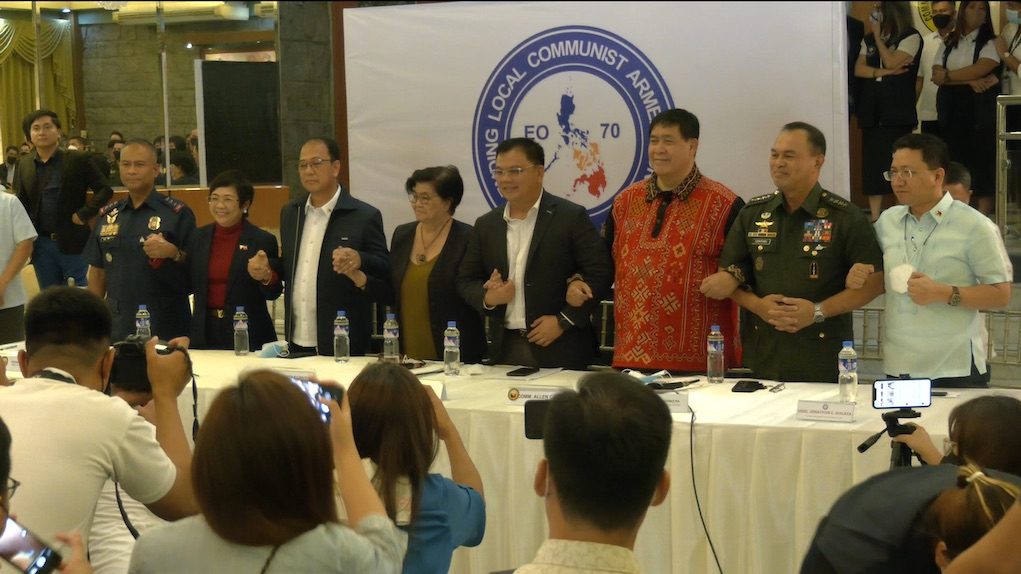 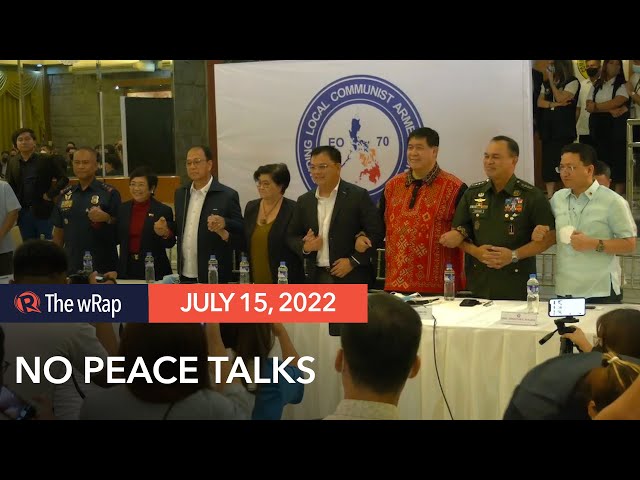 If Marcos heeds this, he would be the first Philippine president post-Martial Law not to pursue peace talks with the CPP-NPA after winning the elections. All presidents from Corazon Aquino resumed peace talks after their poll victories, only to fall through later in their tenure.

Marcos’ peace adviser Carlito Galvez announced this on Friday, July 15, in a press conference after the NTF-ELCAC executive committee held its first meeting in Camp Aguinaldo.

(Yes, there would be no more talks with the group of Joma Sison because we saw that the local peace engagement is better, because there’s goodwill, there’s trust and confidence. NTF-ELCAC is the best solution to this communist terrorist group.”

Galvez added that “in the history of Office of the Presidential Adviser on the Peace Process, all peace talks ended up to nothing.”

National Security Adviser Clarita Carlos, vice chairperson of the NTF-ELCAC, seconded Galvez and said: “Yes [there is no recommendation to resume peace talks], they’re all localized following the position articulated by Secretary Galvez.”

Sison founded the CPP in 1968 to seize power and establish a new democratic state in the Philippines that will be led by the working class and be free from the influence of the United States. It follows the model of China’s Maoist movement. Sison’s rebel movement is also Asia’s longest-running communist insurgency.

What the NTF-ELCAC would recommend to Marcos is instead offer amnesty to surrendering insurgents.

“The task force strongly recommends the need for offering an amnesty to prevent the resurgence of the communist terrorist group (CTG), especially in geographically challenged, isolated and disadvantaged areas,” the NTF-ELCAC said in a prepared statement.

Former NPA chairperson Rodolfo Salas struck an agreement to be cleared of a rebellion case, but in 2020 when the peace talks collapsed and President Rodrigo Duterte cracked down on the Left, he was rearrested on a murder case related to a purge within the local communist movement. The discussion in the Supreme Court was: Does the political offense doctrine mean the agreement for rebellion also covers murder since the purge was allegedly committed in furtherance of the political cause?

“We don’t know yet the nitty gritty of these recommendations so let’s just leave it at that,” said Carlos.

There seems to be warring factions between the current NTF-ELCAC and the old NTF-ELCAC under President Rodrigo Duterte. Former press undersecretary Lorraine Badoy, one of NTF-ELCAC’s spokespersons notorious for red-tagging, said on Facebook that a current NTF-ELCAC official was trying to “silence” her.

Defense officer-in-charge Jose Faustino Jr. said “wala po kaming kinalaman dun, hindi po namin alam (we don’t have anything to do with that, we don’t know), I really don’t have any knowledge about it.“

“I repeat, red-tagging did not come from NTF-ELCAC, we will not tolerate red-tagging, it’s not our policy,” said Faustino, saying that it was the progressive groups which invented red-tagging.

Red-tagging is the act of linking a person or a group to the CPP-NPA, and a trend during Duterte’s time showed that many red-tagged people were eventually killed. Even Carlos said red-tagging was “unproductive” while Solicitor General Menardo Guevarra said it is “dangerous.”

National Commission on Indigenous Peoples (NCIP) commissioner Allen Capuyan also said that “we will not weaponize the anti-terror law.”

The Duterte NTF-ELCAC warned that more cases would be filed as soon as the anti-terror law was upheld, which the Supreme Court has done.

“As long as you don’t commit an overt act, no matter how evil your mind is, you cannot be prosecuted. Even with the anti-terrorism act, a person is safe unless he doesn’t convert that evil mind into action,” said Assistant Solicitor General Angelita Miranda, chair of the NTF-ELCAC legal cluster.

Carlos also said that former NSA Hermogenes Esperon Jr.’s memorandum blocking the websites of news groups like Bulatlat is “under review” and that she “will not be making any comment for now.”

Anti-terror law oral arguments: ‘No other law punishes our state of mind’ Cristina Palabay, secretary general of human rights group Karapatan, said the offer for an amnesty is a “facade to continue state repression.

“Any talk of ‘peace’ from the NTF-ELCAC rings hollow when it continues to deny its hand in red-tagging and inciting human rights violations. When war hawks and red-taggers talk about ‘peace,’ what they actually want is the complete and total surrender to the militarist and anti-people agenda of the NTF-ELCAC,”  Palabay said in a statement Tuesday, July 19. – Rappler.com