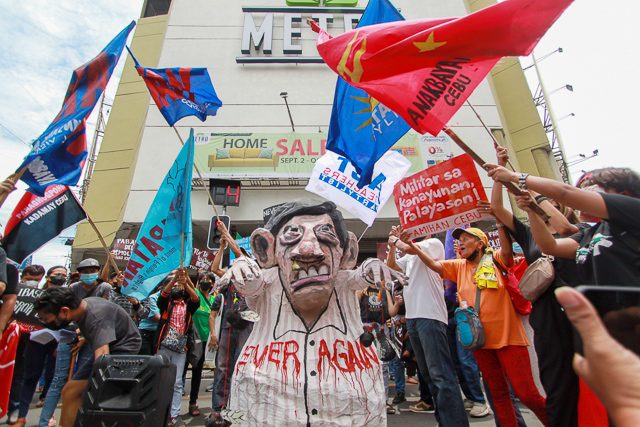 PROTEST. Members of BAYAN Central Visayas, along with different sectoral groups, stage a protest to commemorate the 50th year since the declaration of Marcos' Martial Law, in Colon, Cebu City on September 21, 2022.

CEBU, Philippines – Cebu-based activist groups and unions staged a protest in downtown Cebu City on Wednesday, September 21, remember the 50th year since the declaration of martial law in the Philippines.

(We cannot accept what’s called “to move on” for the Filipino people because there have been more than 10,000 victims and more who still yearn for justice)

It was the dictator Ferdinand E. Marcos, namesake and son of the incumbent president, who plunged the country under military rule when he declared martial law five decades ago.

The groups held a program at the center of Colon Street in front of Metro Colon. Demonstrators burned an effigy of a figure marked with the words “Never Again”.

During the protest, Paglinawan called on the people to remember the victims of Martial Law, especially Fr. Rudy Roman who was abducted in Cebu City by armed men in 1985 and was never seen again.

According to Amnesty International, at least 70,000 people were imprisoned, 34,000 were tortured, and 3,240 were killed during that benighted period.

“Among the … (the victims of Martial Law) were youth and students fighting for quality and accessible education, against campus repression, and democratic reforms,” Kyle Enero, chair of Kabataan Cebu told Rappler.

Among them, Enero said, were Ramon Doong and Edgar Ebesa, who were killed by security forces in the ’70s.

Doong was shot dead when he was still 17 years old at a protest at the Cebu Institute of Technology – University. Ebesa, who was in college, was killed in a protest against tuition fee increases.

READ: [ANALYSIS] Why Cebu is historically renowned as anti-Marcos country)

Groups also called for accountability for the growing national debt, the increase in prices of goods and services, and the continuous silencing of the administration’s critics.

Youth activists and students from the University of the Philippines – Cebu (UPC) also joined by organizing a series of activities that will be held from September 21 to 25.

These will be kicked off by the 1081 Exhibit, a Martial Law remembrance at the Jose Joya Gallery in UPC. It features works from renowned artists like cartoonist Zach, Josua Cabrera, and Rodel Paredes.

“The main objective of 1081 this year is to achieve our (goals) through the youth who were the frontline during Martial Law…If we come together now, we can do so much more,” Mila Lagahit of 1081 Exhibit said during a press conference on Monday, September 19

The UP Students’ Theater Arts Guild for Education (UPSTAGE) and a handful of local poets will hold creative performances about the atrocities of Martial Law and its victims.

In the following days, a film showing of the atrocities of the Marcos administration and a child-friendly book-reading program will also be conducted by student leaders from UPC.