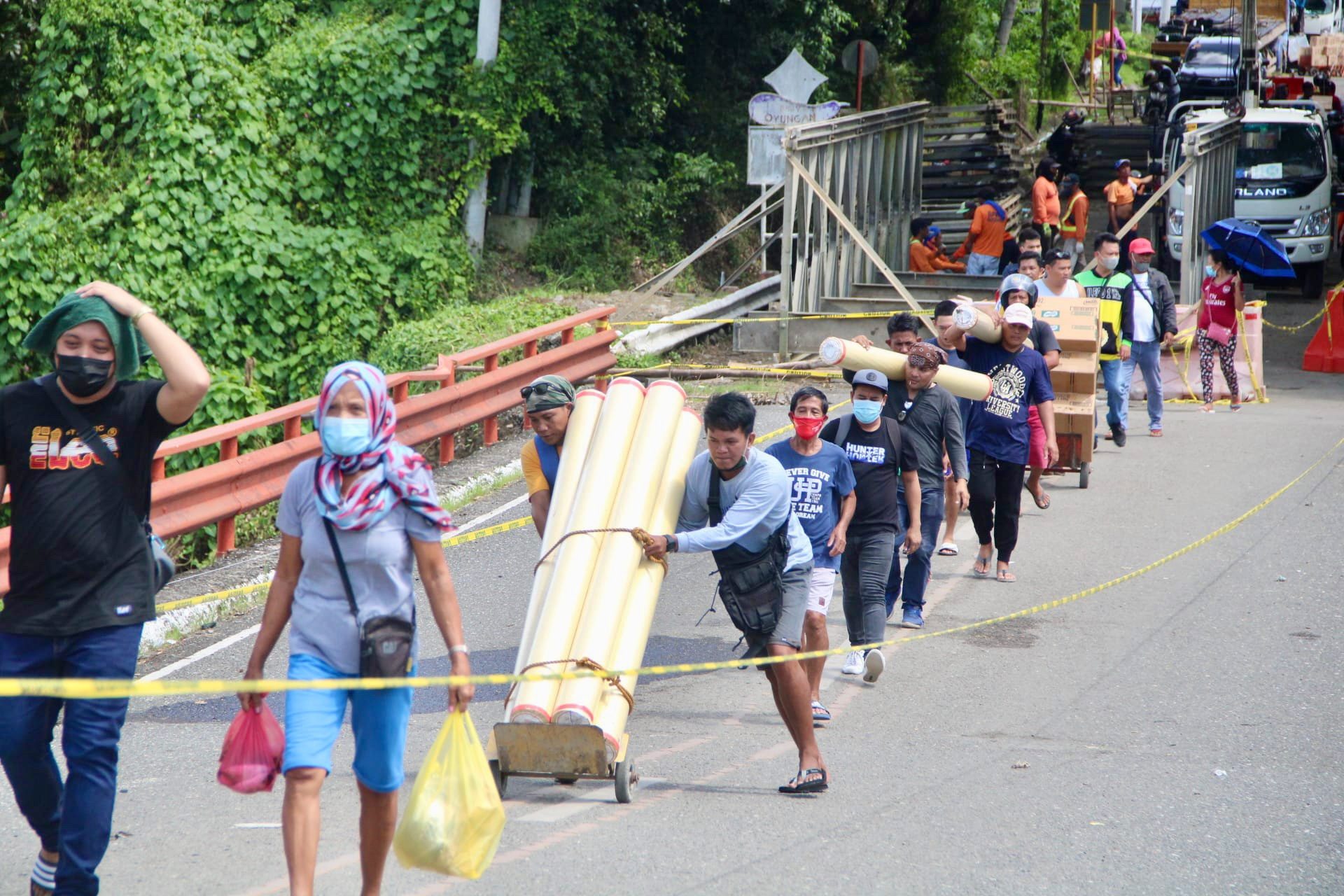 GRIT. Antique folk lug domestic and livelihood needs across the Oyungon Bridge, which links the province to Miag-ao town in Iloilo.

Facebook Twitter Copy URL
Copied
Antique is a ‘Beyond Compliant’ awardee of the Gawad KALASAG Search for Excellence in Disaster Risk Reduction and Management and Humanitarian Assistance. Its recovery efforts in the aftermath of Severe Tropical Storm Paeng would explain why it deserves this recognition.

KALIBO, Philippines – When doctor to the barrio Karl Rosell Ubial began serving Culasi, Antique, four months ago, it took him just a little over an hour to drive 62 kilometers to work from his father’s hometown in Patnongon.

Ubial was stranded in Culasi, which Governor Rhodora Cadiao listed as among the worst hit municipalities.

“There were devastating floods and debris all around,” the rural physician said.

The young doctor and his colleagues continued working through ankle-high water, ministering to community folk and returning residents who had been stranded for days in San Jose de Buenavista, the provincial capital.

He was unable to pay his Undas respects to family in Patnongon, which lies midway between Bugasong, the town on the southern  end of the collapsed Paliwan Bridge, and San Jose.

On his first post-Paeng trips home, Ubial, the son of former health secretary Paulyn Rosell-Ubial,  either rode a pumpboat or crossed rickety bamboo panels on a shallow portion of the river.

He has to take a tricycle to a Culasi station to boards a van for the Laua-an bridge. There’s a walk on the north side, and another on the south side before he gets on another van to Patnongon. Travel time has doubled.

Cairawan bridge has finally one lane open, Karl told Rappler in an interview on Friday, November 11. But with other more important cargo needing that space, the young doctor will continue with his multi-phase commute.

Down south, scores of Antiqueños lugging boxes and carts full of domestic and livelihood needs line up daily at the approaches to Oyungan Bridge, which links to Miag-ao town in Iloilo.

In Bugasong, provincial personnel lower relief goods on ropes from Paliwan bridge to bancas that ferry these to the river’s northern bank in Laua-an. There, other relief workers wait to carry boxes of family food packs, LPG tanks, and light construction material to vehicles headed for other devastated towns.

Deeper in the northern portion, many villages and hamlets remain cut off due to damaged hanging bridges.

To get aid to poor rice and corn farming families who have also lost their crops, provincial workers and local volunteers scramble down embankments, ford streams, and then pull their load up on makeshift pulleys.

It is backbreaking work, but in the aftermath of Paeng’s devastation, Antique folk display grit and a level of cooperation that validates the province’s November 9 “Beyond Compliant” award of the Gawad KALASAG Seal for Excellence in DRRM and Humanitarian Assistance (local DRRM Councils and Offices category) conferred by the National Disaster Risk Reduction and Management Council.

Paeng and the devastation it wrought, said Ubial, “put a lot of things in perspective – how plans and routines are easily created or destroyed by things we cannot control, and how lucky we are that we still have what we have, compared to those who were devastated by this disaster.”

The young doctor expressed concern about the effect of damaged infrastructure on patients. “There used to be a direct route from Culasi to San Jose, then to Iloilo,” said Karl.

Instead of the one hour and a half to two-hour trip to get patients to a tertiary hospital in San Jose, ambulances now take three to four hours to bring them to Kalibo, Aklan. It now takes 8 to 10 hours to get to Iloilo City, using an alternate route.

Oyungon is expected to reopen to light vehicles within November, perhaps next week.

But regional officials of the Department of Public Works and Highways (DPWH) told President Ferdinand Marcos Jr. during his November 8 visit that it would take till year-end to stabilize Paliwan Bridge enough for light vehicles.

“It wasn’t just the deck that was washed out, but also the pier, the posts, on both spans of the bridge,” said DPWH Regional Director Nerie Bueno.

At 50 meters, the missing span is too long for any structurally sound bailey bridge.

The province has spent years lobbying for a new bridge to replace Paliwan. Marcos expressed concern over recovery prospects with major disruption to infrastructure and finally greenlighted the request.

But getting this through the bidding and procurement process, and the approval rigmarole of national agencies, will take a year. Construction will take at least two years.

The DPWH’s stop-gap solution involves a temporary diversion of the river channel to allow the damaged pier to dry out.

The earth dredged to create a new waterway will be dumped to build an embankment as high as the bridge deck before linking the two spans with a bailey bridge supported by an H pile in the middle.

“Hopefully, we may be able to open before Christmas,” Bueno said. “We will then have two points of access, the embankment and the bailey bridge.”

The DPWH is also rushing repairs on the Igmataning Bridge and Pis-anan Road, also in Antique, and the Guimbal-Igbaras-Tubungan-Leon Road in Barangay Nito-an in Guimbal, Iloilo.

The province’s 58,000 families displaced by floods and landslides have all returned home.

There is ample food aid from the national government, private groups and the military.

But people in the villages need help with cooking fuel and drinking water, Governor Cadiao said on Wednesday, November 9.

“There’s a lot of logistics involved and many moving parts to bring these goods to barangays and sitios,” she said in a mix of Filipino and English. Groups of people need to manually carry goods at a distance of 500 meters to one kilometer between rides.

Cadiao moved early to prevent spikes in prices of basic goods – she offered vendors, grocery store owners, and eatery operators free transportation on a province-rented barge for as long as they won’t hike prices.

Private players in the fuel industry have also banded together to help transport tankers via roll-on roll-off vessels to the provincial capital. For the northern towns, the plan was for fuel to land in Culasi port or even Malay, Aklan.

The governor is now planning to bring construction materials to residents’ homes.

Cadiao has also asked the President to approve the P160 million needed to restore water supply to the barangays.

In the meantime, Marcos has approved the regional health unit’s request to purchase more Mobile Water Treatment Plants as its two units and the 15 loaned by the Metropolitan Manila Development Authority to Antique are not enough for affected villages.

Many communities had potable water problems even before Paeng, Marcos had pointed out.  “You don’t really expect them to return those treatment plants when they’ll still be needing it.” – Rappler.com