President Ferdinand Marcos Jr. will be feted at a festival launched in 1980 to help Negrenses ride out a crisis in the sugar industry, which his father’s cronies had raped enough to cause mass starvation among 190,000 sugar workers and a million dependents.

First Lady Liza Araneta Marcos will attend the MassKarade Ball on Friday, October 21, together with Vice President Sara Duterte, top celebrities, and some of the country’s richest individuals.

The first couple will be joined by their youngest son, Vinny, who is the one billed as guest of honor. Their faces currently are the main focus of the banner photo on the MassKara Festival Facebook page. Billboards, posters, and huge decals on the windows of public buses also show them smiling with Bacolod’s new mayor, Albee Benitez, the son of Imelda Marcos’ deputy in the old Ministry of Human Settlements.

San Carlos Bishop Gerardo Alminaza said he and many others were frustrated because “we remember from history that this celebration was started as an attempt to lift the spirits of Negrosanons during the sugar industry crisis under the dictatorship.”

“Just his being there, and actually being considered a guest of honor, is more than enough to erase and revise the true history and meaning of the festival,” said Villalobos. “The first family’s face is everywhere, even in buses traveling as far as Dumaguete.”

The very people who work the fields were the first to lose their livelihood and suffer hunger and malnutrition, while Marcos Sr., his family, and his cronies, like Roberto Benedicto, continued to live comfortably, Bayan Negros pointed out. But the public response of many “kakampink” campaigners is largely subdued, especially in the MassKara host city, Bacolod.

Several persons interviewed by Rappler explained their silence as a courtesy to “kakampink” friends handling the MassKara, like its 2022 executive director Pinky Mirano, who was also the event lead in Robredo’s mammoth rally.

“Despite the Benitez-Marcos connection, even ‘kakampinks’ voted for Albee because he seemed to be our best hope for long-delayed and much-needed progress,” Si told Rappler.

Rafael “Lito” Coscolluela, Robredo’s campaign head in Negros, said politicians saw the MassKara as an opportunity to get presidential attention and gain his good graces.

In 2016, then-president Rodrigo Duterte became the first head of government to attend the MassKara, and he returned in the next two years.

There are fewer events more beneficial to the Marcos grand rehabilitation campaign than the son being hailed on the same land where so many lives were lost to corruption and the mailed fist during his father’s dictatorship.

“It is an appalling and a grave insult to our Negros history,” community journalist Joey Baldonado told Rappler. “Resisting is still important, maybe now more than ever.”

Alminaza wondered why the head of a government grappling with another food and sugar crisis “would rather attend high society gatherings instead of focusing on addressing the urgent needs of the people, specifically agriculture.”

The MassKerade ball, where tickets sell for P3,000, will raise funds for the Hope Foundation and Operation Smile, but the list of visiting glitterati reminds people of the Marcos clan’s high-flying lifestyle until the ouster of the dictatorship in 1986.

The bishop hopes that Marcos, who is also agriculture secretary, will confront problems like the neglect of the sugar industry and the growing reliance on imports that pushes sugar farmers – now mostly agrarian reform beneficiaries – toward poverty.

Much of the ambivalence reflects small town realpolitik in action. It is also the offshoot of Philippine voters compartmentalizing their national and local electoral choices, and the subsequent complications of saving face.

Benitez welcomed anti-Marcos politicians in his council slate. But with the Marcos star-turn a fait accompli, none would speak out. Neither would the “kakampinks” in the council opposition.

The new mayor has rolled out one of the most lavish versions of the festival, and residents eager for the return of Bacolod’s pre-pandemic glitter have responded enthusiastically.

“As far as I know, Albee still has to disappoint,” said Si. “Whether our expectations are justified or not, the majority of Bacolodnons seem to expect Albee to get the best for the city and also expect him to protect Bacolod from possible excesses and abuses of a national government under Marcos Jr.”

“I’m not cheering the visit of the dictator’s son, but if our mayor’s relationship with him can benefit Bacolod and Negros, President Marcos Jr. is welcome to do what good he can to redeem the Marcos name here in Negros,” she said.

An alliance of political dynasties with roots to his father’s martial law regime managed to erode then-vice president Leni Robredo’s lead in the province from more than 550,000 in the 2016 race to just 50,000 in 2022.

Marcos’ overwhelming 31-million national vote could also have something to do with the world-weary attitude. But behind the silence may be some seething.

“Others who remember what Marcos stands for – the martial law years, the plunder of the sugar industry, the massive corruption and cronyism, the profligacy of the Marcos family, and the more recent disinformation and money politics that put another Marcos in Malacañang – will see the visit as insensitive to Negrenses and reflective of the Marcoses’ predisposition to partying, never mind the suffering masses,” said former mayor Coscolluela.

“How Negrenses treat him this time will be reflective not only of his worth but also of how forgetful or forgiving Negrenses are,” he said.

But even Coscolluela’s stance today is to “chill out” on politics and focus on “looking for ways to move forward” by strengthening civil society, engaging with government, developing a new crop of leaders, promoting good governance, and advocating and enabling programs to address many “concerns that beg for attention not just from government but from us ordinary citizens.” 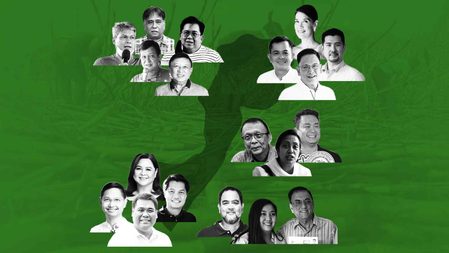