Jan 22, 2015 8:37 AM PHT
Bea Cupin
Facebook Twitter Copy URL
Copied
After a hiatus, Vice President Jejomar Binay's demons continue to haunt him. He is accused of getting close to P200 million in 2010 from a deal between Alphaland and BSP, of which he is national president. MANILA, Philippines – There is a “rule” that Vice President Jejomar Binay follows when speaking to the media: whenever he’s wearing his Boy Scouts of the Philippines (BSP) uniform, he prefers not to discuss politics or recent allegations of corruption.

It appears that Binay, national president of the BSP for nearly two decades, would rather keep the BSP away from the dirty world of politics.

But if Ernesto Mercado, Binay’s estranged bosom body, former Makati vice mayor, and former BSP vice president is to be believed, the vice president does not have the organization’s best interests in mind.

On Thursday, January 22, Mercado is set to reveal during a Senate Blue Ribbon subcommittee hearing that Binay negotiated for the BSP a deal that resulted in millions of losses for the organization and millions in gains for him. 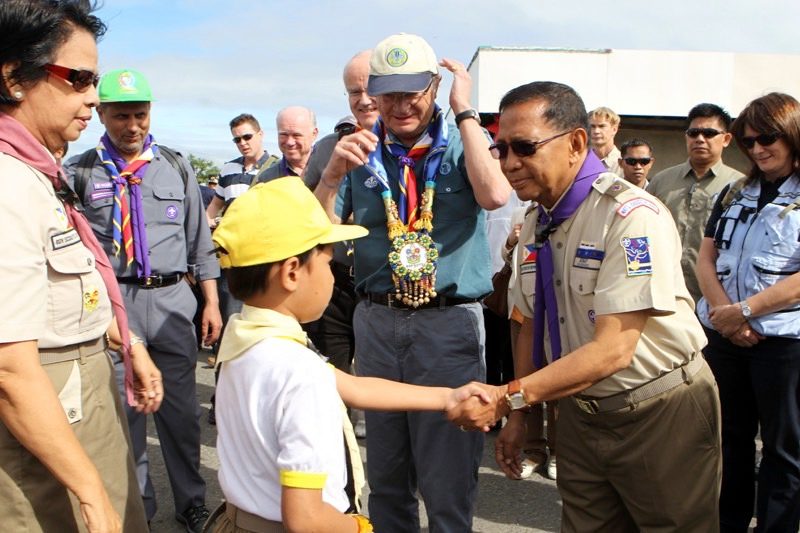 Unaccounted for cash from the deal allegedly turned into kickbacks for those involved, and in Binay’s case, supposedly went to his piggy bank for his 2010 vice presidential campaign.

As early as 2008, Binay declared on his birthday that he wanted the presidency but chose to slide down when survey numbers indicated he had a better chance at the vice presidency.

Binay supposedly pocketed around P188.98 million (US$4.23 million), according to Mercado, the star whistleblower in the subcommittee’s probe into allegations that Binay, during his stint as Makati mayor, also earned from city coffers.

But in an interview with dzRH on Wednesday January 21, Binay’s spokesman for political affairs lawyer Rico Quicho downplayed Mercado’s scheduled testimony, accusing him of being the one who wanted to profit from the deal.

(Alphaland has said on record that their transaction with the BSP is clean and above board, free from anomaly. Alphaland is an institution. They won’t allow themselves to be used in Mercado’s foolishness. Turns out it was Mercado who was asking for kickbacks but Alphaland said no.)

In another interview with Rappler on Thursday, Quicho challenged Mercado to come out with documents to prove his “lies” and not to rely on hazy conclusions. All transactions and deals were approved by the BSP’s national board, not just Binay.

“That’s what they (Binay’s accusers) do – Vice President Binay builds and they destroy,” said Quicho, who also emphasized that the BSP was an apolotical organization that should be not dragged into the “circus-like” Senate probe.

It was also Mercado who accused Binay of hiding his wealth through dummies and secret bank accounts.

The January 22 “revelation” is a first in the subcommittee’s 4-month-long history: it’s the first time a whistleblower has accused Binay of corruption beyond his nearly 20-year stay as Makati mayor.

Mercado said Binay sourced the money through a web of deals and negotiations between the BSP and private companies – all of which were done under his reign. In 2004, Binay stepped in negotiations between BF Goodrich Philippines (now called Sime Darby) and the BSP over a one-hectare Makati property that was “donated” by the former back in 1976.

Based on the deal sealed by Binay in 2005, the BSP would get 60% of the property, while Sime Darby would get the remaining 40%. By this time, the land was already worth a whopping P1 billion.

With the division of the property settled, the BSP moved into talks to develop the land. In 2007, the BSP began negotiations with former Marcos crony Roberto “Bobby” Ongpin of Alphaland Corporation for the project. (READ: Ongpin vs Ashmore: The real deal)

Alphaland, a controversial luxury property developer, was delisted by the Philippine Stock Exchange in September 2014 due to, among others, its repeated failure to submit full, fair, accurate and timely disclosures of material information.

At the time of the BSP deal, Alphaland owned Silvertown (later renamed Alphaland Makati Place Inc), the local arm of Sime Darby, and along with it, the company’s shares in the BSP property. As a foreign company, Sime Darby was not allowed to own land, that is why it needed Silvertown. Who is Mario Oreta?

Mercado, then senior vice president of the BSP, said he opposed the deal because he wanted 20% for the BSP.

It was Binay’s finance whiz and alleged bagman Gerry Limlingan who convinced Mercado to accept the deal. Limlingan, who has also been subpoenaed to the Senate, allegedly told Mercado 20% really went to the BSP but that 5% would “be for Binay” – in particular to fund his presidential campaign in 2010.

In previous hearings, Mercado said Binay was a man who knew how to hide his anomalous deals. For instance, the supposed condominiums given to Binay in exchange for easier transactions at city hall were all named under friends and favored contractors.

Businesses, even a vast Batangas hacienda supposedly owned by the Vice President were owned by aides, friends, and their family members. (PHOTOS: Binay and wife tour guests in ‘Hacienda Binay’)

Mercado said the BSP deal was no different. This time, it was Mercado who signed the Joint Venture Agreement in June 2008, supposedly because Binay had to fly out of the country. Hiding Binay’s supposed shares in the deal was trickier, and this was where Oreta stepped in. The AMPI president supposedly told Mercado they would hide and “clean” Binay’s cut in the deal through his company, Noble Care Management Corporation, which was incorporated in 2005.

A few months later, in August 2008, Alphaland “gave” Noble Care 5.88% of its shares in Silvertown or AMPI, when the company at the time had no income, Mercado said.

Some 2,031 shares were given at the cost of around P10 per share. Alphaland also lent Noble Care P100.4 million.

Based on his computations, Mercado said Binay’s supposed kickback from the BSP and AMPI deal stood at around P188.98 million.

The city of Makati also played a part in Binay’s alleged “prostitution” of the BSP, Mercado said. In 2008, when Binay was still mayor, the city reclassified the BSP land from industrial to commercial/mixed use, practically doubling the price of the land.

In the lead-up to the 2010 elections, Mercado and Binay’s relationship soured. The Vice President broke earlier promises that Mercado would take over the mayorship of the city, instead fielding son Jejomar Erwin J. to run for mayor.

Mercado ran against the younger Binay and lost. Mercado and Binay have been estranged since.

First, Mercado said, the BSP ended up being the chief financier of Alphaland’s development project when the company used the land as collateral for a P1.7 billion Development Bank of the Philippines loan in 2010.

A year later, the Joint Venture Agreement between Alphaland and the BSP was tweaked: the organization’s National Executive Board approved the sale of the land to Alphaland, at the same time injecting its P600-million from the deal back into the development project.

Binay, the BSP and Alphaland supposedly acted swiftly. Mercado said all the documents – the amendment to the Joint Venture Agreement and the Deed of Absolute Sale for the land – were all signed quickly and signed on the same day, June 2, 2011.

In 1999, Binay waged war against the Commission on Audit (COA), which, through a resolution, insisted it should be auditing the BSP. Binay argued against this, insisting the BSP was not a Philippine government agency.

It took 12 years but in 2011, the Supreme Court ruled the BSP was a “public corporation or a government instrumentality” and therefore subject to auditing by COA. (READ: COA to Boy Scouts: Produce records for P221M collections)

COA noted in its first audit of the BSP in 2012 that it still had P600 million in receivables from its “Joint Venture Partner.” The value of the project grew further in 2012 after Makati, under the mayorship of Jejomar Erwin Jr, upgraded the Alpahland development’s approved floor-area-ratio from 8 to 8.

The modified version of the deal, Mercado discovered, effectively reduced the BSP’s 15% share from two towers and the development’s “Podium” to only one tower and the Podium.

Mario Oreta of Silvertown and Alphaland last spoke with Mercado in December 2014. He told Mercado the BSP actually now owns P3 billion in shares in the project. But, Mercado asked, where are the documents to prove this? – Rappler.com