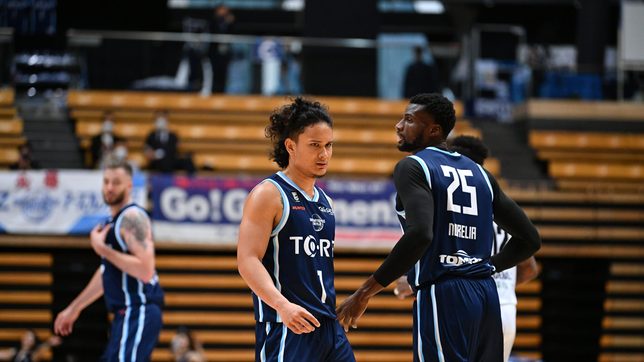 MANILA, Philippines – The Aomori Wat’s snapped a lengthy 11-game losing streak in emphatic fashion as they blew out the Earthfriends Tokyo Z at home, 89-65, in the Japan B. League on Saturday, December 4.

Five Aomori players breached double-digit scoring, led by import Renaldo Dixon’s 21 points, 8 rebounds, 4 assists, and 4 steals in the win that tied them up at 2-16 in the standings with Tokyo in Division 2.

Despite the rout, Filipino big man Kemark Cariño failed to see the court at all against his compatriot Juan Gomez de Liaño, who was limited to just 2 points, 3 assists, and 2 rebounds with 3 turnovers in 24 minutes as a starter.

Even without their prospect import, Aomori set the tone early on as it turned a 22-14 first-quarter start to a 46-35 lead at the half.

The game then quickly turned into a non-contest in the third period as the Wat’s fired up a 14-6 run to turn their halftime lead to a 60-41 gap at the 5:07 mark.

They then peaked with a 31-point separation, 80-49, with 6:53 left in regulation before finally taking their foot off the gas en route to a 24-point winning margin.

Earthfriends import Joshua Crawford paced the forgettable loss with a 17-marker, 13-board double-double as they now turn their focus to a revenge rematch on Sunday, 1 pm, Manila time.

Like his younger brother, Javi Gomez de Liaño was also a non-factor in the Ibaraki Robots’ heartbreaking 77-83 loss to the defending champion Chiba Jets over at Division 1.

This, however, was due to a lack of playing time as the elder Gomez de Liaño only got off one shot attempt with no other stats in 3 minutes off the bench. Local guard Atsunobu Hirao instead led the failed upset bid with 20 points on 7-of-14 shooting in 35 minutes.

The Robots, despite eventually falling to a 2-13 record against the 11-4 Jets, provided a legitimate scare in the clutch as they still led, 77-76, with 2:14 left in regulation.

But that turned out to be Ibaraki’s last gasp on offense as the defending champions stayed composed, and quickly shut the game down with a 7-0 turnaround ignited by a Christopher Smith go-ahead triple at the 1:54 mark.

Chiba import Gavin Edwards churned out a 23-point, 5-rebound, 5-assist line off the bench in the nail-biting win, backstopped by Smith’s 22 markers on an 8-of-16 clip.

Gomez de Liaño and the Robots, though, look to hang on next time and complete their upset bid in the Sunday rematch at 2:05 pm. – Rappler.com