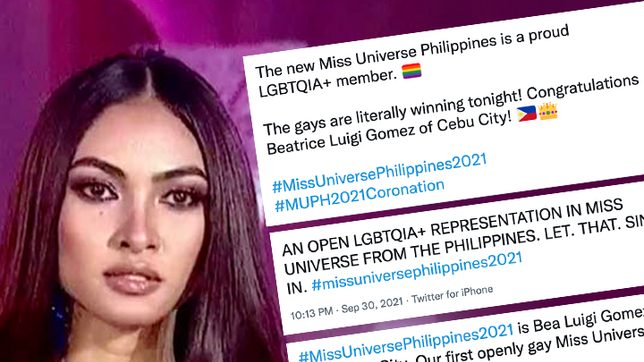 Bea competed in the coronation night held in Panglao, Bohol, besting 27 other candidates. She will be representing the Philippines in the Miss Universe 2021 pageant, which will be held in Israel in December.

Bea will be the first openly queer beauty queen to represent the Philippines in the pageant. For fans, her win is also a win for the LGBTQ+ community.

Bea had earlier opened about about criticism she’d gotten for being herself after she won the Binibining Cebu pageant.

“When people condemn me because they say it is not what it says in the Bible, somehow I’m always reminded that being able to say who I am on stage in front of thousands of people was what God wanted me to do,” Bea said in an Instagram post in 2020.

On Twitter, Filipinos celebrated her being “not your typical pageant candidate.”

Congratulations to Bea and all the queens! – Rappler.com