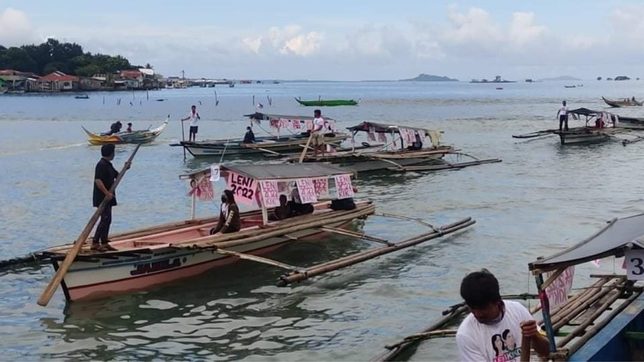 PINK. Fishermen sail off the coast of Isabela City in Basilan province to show their support for Vice President Leni Robredo and Senator Francis Pangilinan.

Facebook Twitter Copy URL
Copied
Fishermen sail on the waters off the coast of Basilan for at least an hour while displaying white tarpaulins marked in pink, 'Leni 2022 Kiko'

ZAMBOANGA CITY, Philippines – Dozens of fishermen in Basilan province set sail for a fluvial parade along Basilan Strait on Wednesday morning, December 1, to show they were behind the 2022 presidential bid of Vice President Leni Robredo and her running mate Senator Francis Pangilinan.

There was also a group of fishermen who sailed in the coastal waters off Isabela City.

Leni Para Sa Lahat-Basilan focal person Ivie Creon Ragay said the fishermen sailed on the waters off the coast of Basilan for at least an hour while displaying white tarpaulins marked in pink, “Leni 2022 Kiko.”

Robredo helped the Basilan fishers through a livelihood program, especially during the pandemic, and it was their way of giving back, said Samy Jaani, one of those who participated in the fluvial parade.

Dr. Anton Mari Lim, a volunteer for Robredo’s campaign group in Zamboanga City, said that Wednesday’s fluvial parade was part of a series of activities aimed at drumming up support for the Robredo-Pangilinan ticket.

On November 26, organized tricycle drivers went around Isabela City to help in distributing Robredo-Pangilinan materials such as tarpaulins, stickers, ribbons, and t-shirts.

Willard Tagbart, president of the local Tricycle Driver-Strikers Association, said Robredo sent them aid at a time when they were suffering as a result of the COVID-19 pandemic. -Rappler.com