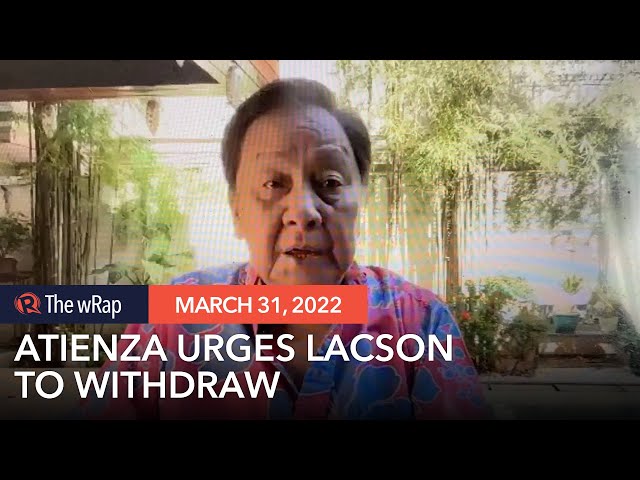 Asked if he had been thinking of backing out from the race, Atienza told reporters on Thursday, March 31, “Very seriously.”

“I can handle the health reasons…as you said, I can handle my affairs via Zoom but the thing is, if it’s not helping anymore, a man like Manny Pacquiao, you give him a clean break,” Atienza said.

The congressman said that he wants fellow candidate Senate President Vicente “Tito” Sotto III to run with Pacquiao, adding that they align in terms of values.

Atienza said he hopes Senator Panfilo Lacson, who is running in tandem with Sotto, would back out too. Lacson’s party, Partido Reporma, earlier dropped him in favor of Vice President Leni Robredo.

“I’m praying and hoping [for] Ping [to back out]. He already knows the realities of his political position,” he said. “I hope he backs out too and that could change the whole structure that could completely demolish Bongbong-Sara tandem.” “I am not backing out. I reject his call. It is uncalled for to say the least. He should go back to school and study GMRC (good manners and right conduct) which law I authored,” Lacson said in a chance interview with reporters in Kalawit, Zamboanga del Norte.

Atienza said that he would officially withdraw his candidacy if an agreement between Pacquiao and Sotto would be finalized.

He said he has already reached out to Pacquiao and Sotto. He said that he already told Pacquiao about his preference before he had knee surgery.

Atienza said if it were solely up to him, he said, he would not tarry in making a decision.

“I’m hoping to get a reaction from each one of them for the next few days. I’m not waiting for two weeks, three weeks. Meanwhile, these two (Marcos-Duterte), they are the next leaders of the nation sa basurahan (in the garbage bin),” he said.

“I am humbled and will certainly appreciate such a move. Lito Atienza has, is and will always be a true stateman,” said Sotto.

As of Wednesday, Pacquiao said that he had yet to meet with Sotto regarding the matter.