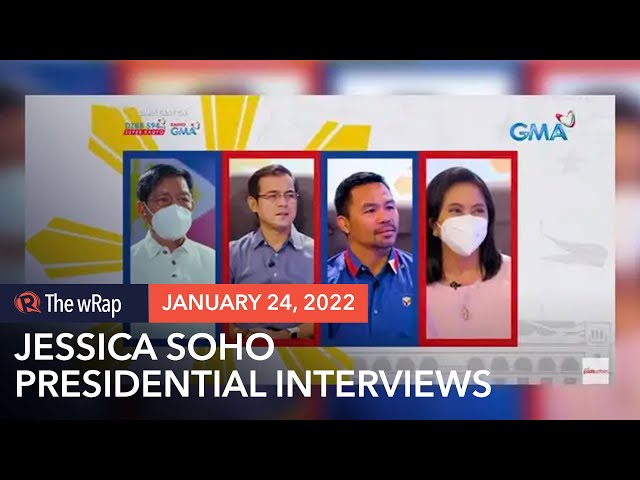 Marcos skipped the show out of dislike for the veteran journalist whom his team called “biased against the Marcoses.”

During the interview, Senator Panfilo Lacson, Manila Mayor Isko Moreno, Senator Manny Pacquiao, and Vice President Leni Robredo went through four rounds of questions in a one-on-one style interview. The interview followed a strict format where the candidates were timed for their answers and they picked via draw lots who would go first.

Unlike the Commission on Elections or Comelec-sponsored debates, however, the candidates did not get to ask each other.

The four rounds were:

Marcos’ spokesperson Vic Rodriguez said they opted to skip Soho’s special program because “we believe her questions will just focus on negativity about BBM [Bongbong Marcos] which the UniTeam dislike[s] and will not subscribe.”

Social media was abuzz from Friday night, January 21, to Saturday, with critics calling Marcos a coward for not showing up to the first ever presidential interview. Marcos’ camp said the dictator’s son will appear in a similar program to be hosted by entertainment host Boy Abunda.

GMA Network defended Soho, a veteran and multiple Peabody Award-winning journalist, by saying in a statement that “the questions are tough because the job of the presidency is tough.” Robredo was grilled on her readiness for the presidency despite being the most inexperienced politician out of the five and whether she was strong enough to lead. Robredo was also asked about her failure to unite the opposition.

“Depende sa kung paano mo dini-define ang kamay na bakal. Kung ang kamay na bakal ay pagpapakita ng katapangan, in many stages of my being a vice president, pinakita ko ‘to,” said Robredo, citing the achievements of her office after President Rodrigo Duterte kicked her out of the Cabinet, and her saying yes to co-chair Duterte’s anti-drug body “knowing for a fact that I was entering the lion’s den.”

(It depends how you define a firm hand. If a firm hand means being courageous, then in many stages of my being a vice president, I have shown this.)

Pacquiao’s poor attendance in Congress and tax compliance were scrutinized. Pacquiao dismissed the issue of his tax evasion charges, saying he had been compliant and his lawyers were on top of it.

Soho also cornered the boxing champion, a known Christian, and asked if he regrets saying in the past that gays were worse than animals.

(I was misunderstood…. I’m not in favor of same-sex marriage, because based on my beliefs, I will follow what the Lord wills.)

Lacson’s vast experience in government also meant he had more controversies to answer, including his part in Martial Law abuses when he was a member of the Metrocom Intelligence and Security Group-Police Intelligence Branch.

Lacson denied that he tortured anybody during Martial Law, claiming that the accounts in the highly acclaimed book of Alfred McCoy were wrong.

Lacson was also grilled on the Dacer-Corbito Murder case, where he was tagged as a mastermind and went into a year of hiding.

Lacson justified that when he fled the country, there was no warrant of arrest against him yet. Indeed, Lacson left the country on January 5, 2010, days before a justice department indictment. The warrants of arrest were issued by the court only in February and July that year.

Still, Lacson evaded the warrant that came out, and he only came back in March 2011, after the Court of Appeals voided his warrants.

(I did not violate anything because I did not have a hold departure order. I did not go out of the criminal justice system, I was still bound by it, and I was still virtually a prisoner. I might not have been confined within the four walls of a prison cell, but my movements were restricted.)

Moreno was asked to reconcile his ever-changing statements on Duterte, at one time blasting the President and in another pandering to him. Soho asked if that rhetoric makes him a “trapo” or a traditional politician.

Soho also made Moreno explain why he kept the P50 million in excess campaign funds he declared after the 2016 senatorial elections.

(As long as you’re paying the proper taxes. That’s what the BIR said. Because you are holding the money. You had limited expenses during the campaign but your donation exceeded what you spent…. You need to pay tax and it will come out as income.)

The program immediately earned praises from viewers and set the stage for more similar town hall meetings. It also upped the pressure on Marcos to attend and face the tough questions himself. – Rappler.com