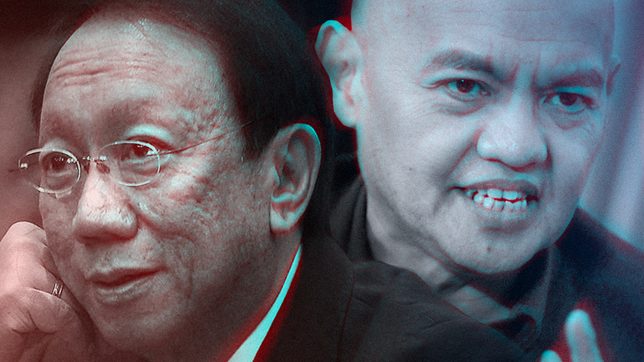 Facebook Twitter Copy URL
Copied
Having been denied by UP's human resources department, Calida appeals to the board to get Leonen's SALNs

Minutes of a November 2020 meeting of the University of the Philippines (UP) Board of Regents showed how Solicitor General Jose Calida went to extra lengths to obtain the Statements of Assets, Liabilities, and Net Worth (SALN) of Supreme Court Associate Justice Marvic Leonen.

“Chair [Prospero] De Vera disclosed that he received a letter from the Office of the Solicitor General (OSG) requesting reconsideration of the decision of the UP Diliman Human Resource Development Office (HRDO) to deny the OSG’s request for a copy of the Statement of Assets, Liabilities and Net Worth (SALN) of Supreme Court Justice Mario Victor Leonen,” said the minutes of the UP board’s meeting on November 26, 2020, uploaded on the website of the Office of the Secretary of the University (OSU).

Calida’s request took up a page on the 34-page minutes, but it was redacted in full by the OSU. However, highlighting the redacted part and copy-pasting it would reveal the content. Rappler was alerted about the minutes by an article of the Philippine Collegian, UP’s student paper.

UP’s Board of Regents did not reach a decision on Calida’s request. The board did not tackle it in their next meeting on January 28. The minutes of this meeting were also uploaded to the website.

The House committee on justice will hear the impeachment complaint against Leonen on Thursday, May 27, anchored on his alleged missing SALNs from the time he was a professor up to when he was dean of the UP College of Law.

It’s not clear from the minutes when Calida sent the request, but the meeting took place a month after the Supreme Court denied a similar request from the Office of the Solicitor General (OSG).

The request to the Supreme Court was made for the purpose of initiating a quo warranto petition to oust Leonen, the fiercest dissenter on the bench.

The minutes revealed that Calida first requested the SALNs from the UP HRDO, but his request was denied. That’s when Calida went to the board to ask them to “override the decision of the HRDO and authorize the release of SALN of Justice Leonen while he was a faculty member of the University of the Philippines.”

Calida didn’t stop there. He requested UP’s Office of the President to include it on the board’s agenda.

According to the minutes, the board discussed the legalities of the request, including the Supreme Court’s own reasons for denying the request, which is the post-Corona administrative rule that the release of SALNs must be justified to the en banc.

Under A.M. No. 09-8-6-SC, requests for SALNs “must be made under circumstances that must not endanger, diminish or destroy the independence, and objectivity of the members of the Judiciary in the performance of their judicial functions, or expose them to revenge for adverse decisions, kidnapping, extortion, blackmail or other untoward incidents.”

De Vera was of the opinion that Calida’s request was within the jurisdiction of the board since “the OSG’s request may be considered as a request under the Freedom of Information,” according to the minutes.

But the board eventually deferred making a decision.

“After further discussion, Chair De Vera moved to defer action on the matter and to schedule a special Board meeting to discuss the various legal aspects of the issue, and instruct the Vice President for Legal Affairs to prepare a briefer for the members of the Board, particularly with respect to the Supreme Court decision, the instruction of the Ombudsman, and UP’s process for request and approval of FOI requests coming from the other parties as far as UP is concerned. There being no objections, the motion was approved,” said the minutes.

It would depend on the appetite of the House justice committee whether to push this. During the impeachment hearings of former chief justice Maria Lourdes Sereno, UP’s HRDO heeded the inquiry of the committee. Upon the committee’s request, the HRDO said it could retrieve only the 2002 SALN of the top magistrate at the time.

Calida would later initiate a novel quo warranto move to oust Sereno, superseding the House’s impeachment process. Amid all constitutional questions at the time, the justices proceeded to oust Sereno in an unprecedented and very controversial 8-6 vote, on the ground that her non-filing of SALNs amounted to lack of integrity.

Leonen was among the six dissenters.

Hundreds of lawyers and law professors have signed several manifestos of support for Leonen, calling the complaint “a palpable assault on judicial independence.”

The last year of supposed non-filing is 2009, which is already 12 years ago.

In June 2018, after the Supreme Court ousted Sereno, it promulgated the decision Del Rosario vs People which set an eight-year prescriptive period for Republic Act No. 6731 – the Code of Conduct for Public Officials that governs the filing of SALNs.

Based on that decision alone, even if Leonen failed to file his SALN up until 2009, the crime has already prescribed.

The Del Rosario decision could be seen as the en banc protecting itself and others vulnerable to SALN-related attacks.

“In the preservation of our democratic rights, it is the Supreme Court that truly holds the door, that actually decides everything, to balance everything out, and protect the interest of individuals against the interests of government. In this case, while it may be seen as protecting themselves, it is actually a correct decision towards independence from the executive government,” said former Integrated Bar of the Philippines (IBP) national president Abdiel Dan Elijah Fajardo in an earlier Rappler Talk interview. – Rappler.com