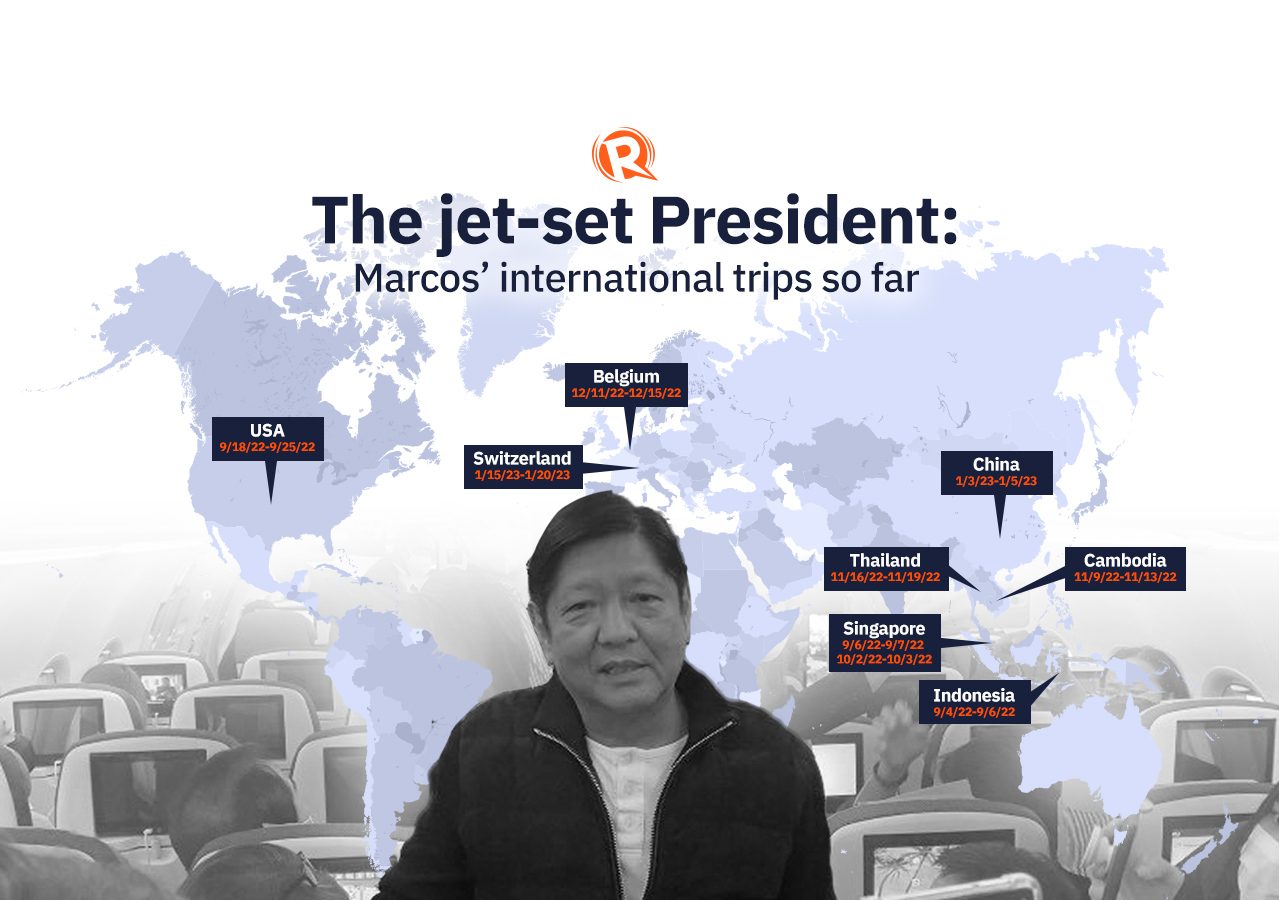 VISITS. President Marcos has made several trips to other countries in his first several months in office. Photo by Bea Cupin/Rappler

Facebook Twitter Copy URL
Copied
In all these trips so far, the President has been accompanied by family members who are elected officials

MANILA, Philippines – President Ferdinand Marcos Jr. is currently on his eighth foreign trip as the Philippines’ chief executive at the Swiss town of Davos for the World Economic Forum.

During the 5-day trip, from January 15 to 20, Marcos presented his economic plans for the Philippines in the waning months of the pandemic, as well as the “soft launch” of the sovereign wealth fund, the Maharlika Investment Fund. 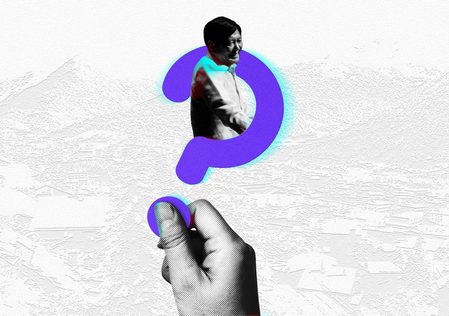 With his planned trip to Japan in February to be his ninth, Marcos is on track to beat previous president Rodrigo Duterte for trips undertaken in their first year in office. Duterte made 19 trips from September 5 to May 24, 2017. (READ: What kept Marcos busy? Courtesy visits, meetings fill President’s first 100 days)

In all these trips so far, Marcos has been accompanied by family members who are elected officials.

Let’s take a look at the countries Marcos has visited so far.

His first set of international trip brought him to Indonesia and Singapore (counted as one trip), from September 4 to 7, 2022.

During his visit to Indonesia, he signed a joint plan of action between the two nations, as well as agreements in the fields of defense and security, creative economy, and cultural cooperation. (LIST: Deals from Marcos’ Indonesia trip)

Investments signed during the trips total P804.78 billion, according to Marcos.

In both countries, Marcos met with Filipino communities there the day he arrived. Marcos made his international debut in New York in the United States during the United Nations General Assembly (UNGA) on September 21, 2022 (September 20, New York Time).

In his 20-minute speech, Marcos talked about the country’s bid for a seat in the UN Security Council, and expressed his commitment to the UN Convention on the Law of the Sea (UNCLOS). Climate change, food security, and the war in Ukraine were also taken up in his speech. 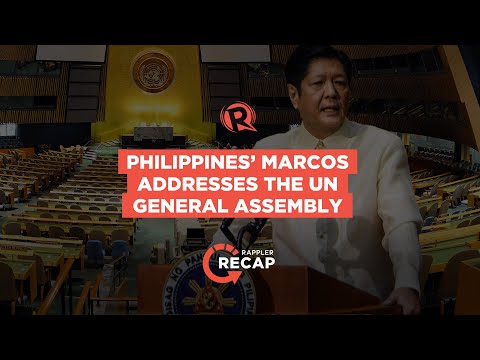 He also watched an Eric Clapton concert and the Broadway show Into the Woods during the trip. 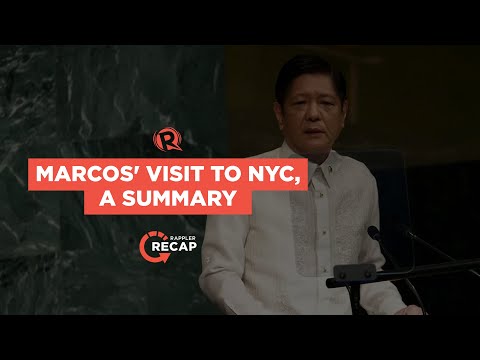 Marcos and his family made a surprise visit to the Singapore Formula 1 Grand Prix on October 2, 2022. Claiming that the visit also involved work, officials neither confirmed nor denied the trip until a few days after. Marcos was in Phnom Penh, Cambodia, from November 9 to 13, 2022, for the 40th and 41st Association of Southeast Asian Nations (ASEAN) Summit.

Besides the summit between the nations, he held bilateral meetings with Brunei as well as South Korea and talked with Chinese Premier Li Keqiang.

It was also during the Summit that the different member-states released a five-point consensus on the unrest in Myanmar, as well as agreeing ‘in principle’ on the membership of Timor-Leste into the ASEAN.

This time, he met with the Filipino community in Cambodia after the Summit, on November 13.

SUMMARY: Marcos’ interventions at the ASEAN Summit in Cambodia His next trip came a few days after, this time for the Asia-Pacific Economic Cooperation (APEC) Economic Leaders’ Week in Bangkok from November 16 to 19, 2022. Marcos focused on food security, pandemic readiness, and climate change. In December, the President headed to Brussels, Belgium, for the ASEAN-European Union Summit.

A courtesy to China

The trip led to an agreement between the two countries to establish official communication lines to resolve disputes over the West Philippine Sea.

Thirteen other agreements were signed, including bilateral deals on tourism, trade, and information. Winter wonderland at the WEF

The World Economic Forum, running from January 15 to 20 in Davos, Switzerland, is a gathering of economic and business leaders, along with heads of state and other government officials to discuss how to address global issues, as well as learn practices in leadership and management.

The forum, however, has been criticized for serving only as an elitist platform, with no concrete resolutions carried out after. The Philippine delegation reportedly had 70 people, according to Vera Files.