BIG BOOST. CJ Cansino comes through the clutch for the Maroons. 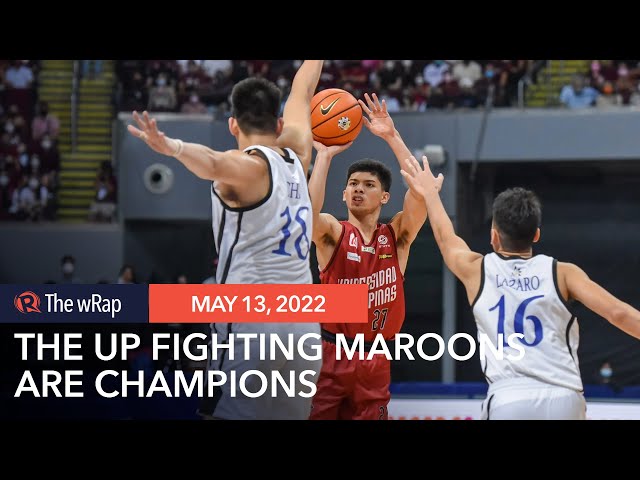 MANILA, Philippines – For the first time since 1986, the UAAP basketball championship comes home to Diliman.

The UP Fighting Maroons prevailed over the Ateneo Blue Eagles dynasty after three tense finals battles, ending with a 72-69 overtime triumph in the do-or-die Game 3 at the Mall of Asia Arena on Friday, May 13.

JD Cagulangan took matters into his own hands and blew up the Ateneo empire with a smooth game-winning step-back three with just a fraction of a second left.

Malick Diouf, who bagged the Finals MVP, powered the Maroons with 17 points and 9 rebounds, while CJ Cansino – who forced overtime with a clutch triple – unloaded 14 points.

Cagulangan finished with 13 points on top of 5 rebounds, 4 assists, and 2 steals, while Ricci Rivero had 9 points.

In the extra period, Ateneo’s Gian Mamuyac turned into a man possessed as he drained two huge threes, the latter coming from the corner at the 1:47 mark for the 69-64 separation.

Yet somehow, UP still tied the game 69-all after Cagulangan sank a wild three, followed by a wide-open Diouf dunk with 39.7 ticks left.

As Cagulangan completed the upset with a game-winning trey, the Maroons also spoiled the big game of Ateneo guard SJ Belangel, who fired a game-high 27 points.

Off a slim 46-47 deficit entering the fourth quarter, UP stormed ahead with a crucial 10-3 run, ending with a Harold Alarcon turnaround jumper at the 6:04 mark for the 56-50 lead.

Unfazed, Ateneo got the lead right back with a 7-0 response, highlighted by a lucky-bounce Raffy Verano triple with 2:33 left, and two Ange Kouame free throws with 2:07 remaining for the 57-56 edge.

Pressure continued to rise on both ends as SJ Belangel sank two freebies with 56.7 seconds left, before the returning Cansino answered with a cold-blooded tying three at the 47.8-second mark, 59-all, to force overtime.