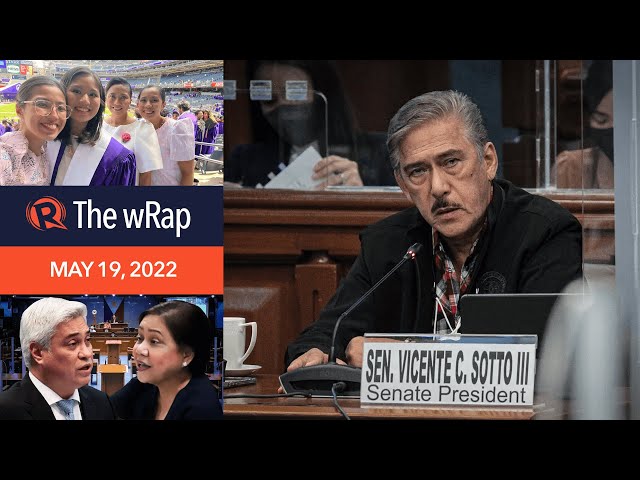 Senate President Vicente Sotto III warns of a ‘constitutional crisis’ if the Supreme Court grants the petitions to suspend the canvassing of votes and the proclamation of presumptive president Ferdinand ‘Bongbong’ Marcos Jr.

The fight for the next leader of the Philippine Senate heats up, with popular lawmakers Cynthia Villar and Juan Miguel ‘Migz’ Zubiri emerging as frontrunners.

President Rodrigo Duterte avails of a legal midnight appointment for the Supreme Court and picks Maria Filomena Singh of the Court of Appeals.  Singh, 55, will serve 14 years or until 2036 — beyond the term of incoming President Ferdinand Marcos Jr.

Tesla Inc CEO Elon Musk says on Wednesday, May 18, while he voted for Democrats in the past, he will now vote for Republicans.

Vice President Leni Robredo’s youngest daughter Jillian graduates from the New York University Wednesday, May 18, earning her Bachelor of Arts degree with a double major in mathematics and economics. – Rappler.com