“Former Senator Ferdinand ‘Bongbong’ Marcos Jr. is the lone presidential hopeful who will not attend the debates for now due to conflict of schedule,” said the news franchise CNN Philippines in an announcement on Monday, February 14.

Marcos’ running mate Davao City Mayor Sara Duterte will not attend too, but she did not provide a reason, according to CNN Philippines.

The camps of other presidential aspirants have criticized Marcos’ non-attendance in the fora.

Ernest Ramel, chairman of Mayor Isko Moreno’s Aksyon Demokratiko, said: “His spokesperson may just run out of excuses for him not to attend any of the presidential debates and fora.”

“We see that eventually people will understand that what they need is ‘Tunay na Solusyon, Mabilis na Aksyon’ (True solution, quick action) amidst these very difficult times. Not more of promises of unity when he actually represents discord, promises without any real pruweba (proof) and motherhood statements,” said Ramel in a statement last week.

Marcos’ spokesperson Vic Rodriguez said Monday they will attend the live debate hosted by the SMNI network owned by Pastor Apollo Quiboloy who’s wanted by the FBI for sex trafficking of children. Quiboloy has endorsed Marcos and Sara Duterte. The debate is scheduled from 6-10 pm on Tuesday, February 15.

During the 2019 senatorial elections where her Hugpong ng Pagbabago (HnP) campaigned for administration allies, Duterte was very open to media, always granting interviews on the sidelines of sorties.

Running for vice president alongside Marcos, however, Duterte has turned evasive too.

The Commission on Elections (Comelec) has urged the candidates to join debates, especially those they will organize, otherwise it said non-attendance should be a red flag to voters.

Political analysts have commented that the controlled narrative of Marcos and Duterte, dubbed the Uniteam, has helped boost their popularity so far.

Marcos continues to build up his survey numbers, reaching 60% in the last Pulse Asia survey conducted from January 19 to 24. In far second place is Vice President Leni Robredo with 16%.

“People continue to await what his real plans are for the country and for the Filipinos aside from the motherhood statements he delivered in his 15-minute speech during his proclamation rally,” said Ramel in an earlier statement.

Compared to other aspirants, Marcos has not released a comprehensive roadmap for his platforms, only releasing press releases on plans to boost agriculture, tourism, education, and small businesses. 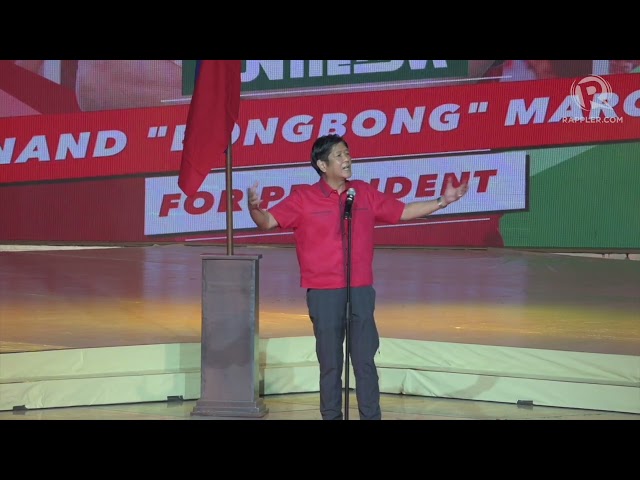