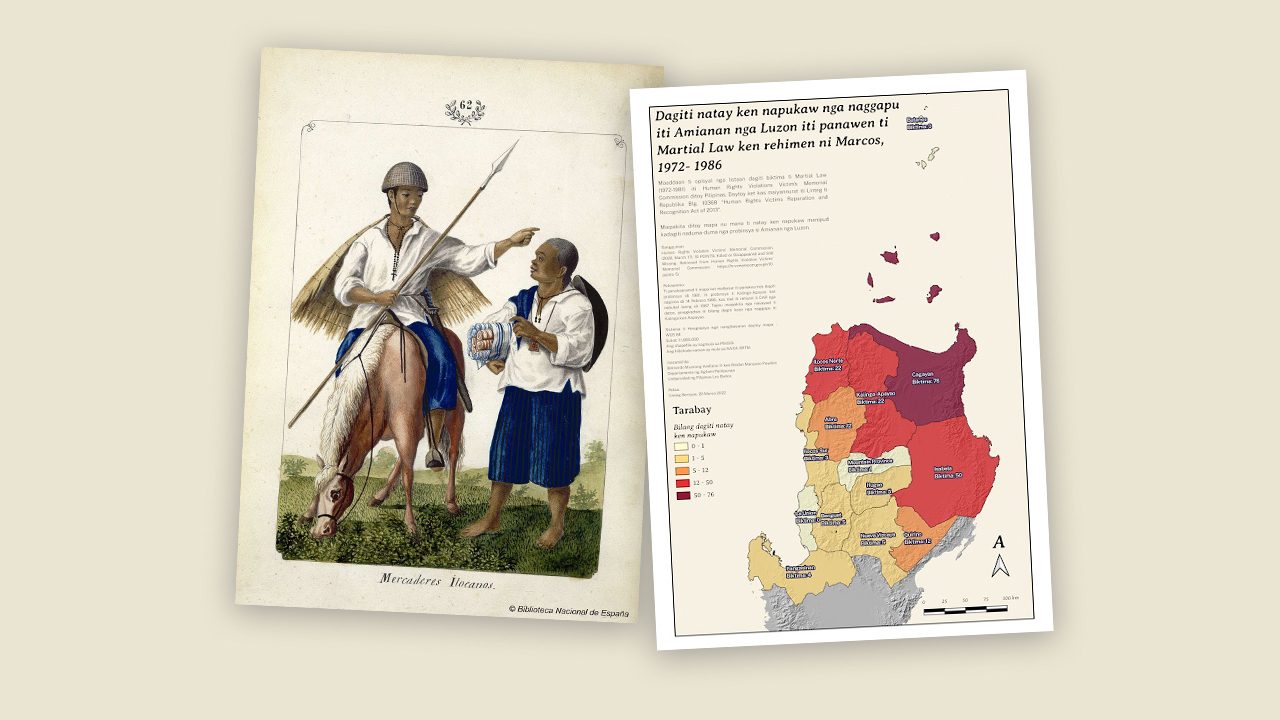 Facebook Twitter Copy URL
Copied
The ‘Solid North’ may be about vote manipulation and the 3Gs, but is also a cultural survival kit for Ilocano migrants

BAGUIO CITY, Philippines – One of the persistent myths about the Marcoses is that they were responsible for bringing Ilocanos to the Philippines’ so-called frontier areas. These were the sparsely populated areas with lush natural resources, like Mindanao, Apayao, Kalinga, and Palawan.

The post came out in May 2014, two years before the late dictator’s son and namesake failed in his bid for the vice presidency, and eight years before he achieved a majority victory in the 2022 presidential election.

Mariano was a supervising teacher in Laoag, Ilocos Norte. He did not teach nor farm in Mindanao.

When we went to Narra in Palawan to cover the administration of contraceptive implants among the women there, a barangay official told us that it was Ferdinand Marcos who brought the Ilocanos to that town.

Narra was not named after the indigenous hardwood but after the National Resettlement Rehabilitation Administration, a program started in 1954 to resettle landless Luzonians in Palawan. The municipality of Narra was indeed created in 1969 by then-president Marcos, but the Ilocanos had by then already long settled in Palawan.

Ilocanos, in fact, started migrating to other parts of the country centuries ago.

According to demographer Peter Xenos, the situation of Ilocanos is novel in the Philippines because early population pressure had begun to impinge on their agricultural system.

During the Spanish period, the population density in the Ilocos Coast was already three times that of the rest of the colony, Xenos wrote in “The Ilocos Coast since 1800,” one of several essays in the book Population and History: the Demographic Origins of the Modern Philippines, published in 1998 by the University of Wisconsin Center for Southeast Asian Studies.

Ilocos land is not the most fertile in the country, so something had to give. That is why demographers refer to the Great Ilocano Diaspora in the 19th century when the Ilocanos started streaming out of their historic homeland.

“By the end of the nineteenth century, more than 290,000 Ilocanos – 36% of the entire self-identified population – had come to live outside the four provinces of the Ilocos Coast and the Abra River valley – the last itself an expansion territory,” Xenos said.

In Philippine history, this represented one of the major migrations by members of one Philippine language group.

Ilocano farmers mostly went to the inner portion of the Central Plain of Luzon, with just less than two-thirds of the diasporic Ilocanos moving to Tarlac, Nueva Ecija, and Pangasinan in 1903. Many also migrated to Cagayan Valley and Zambales.

In 1970, Xenos said that a huge part of northern and central Luzon was already ethnically and linguistically Ilocano.

“Of the 196 Luzon municipalities numerically dominated by Ilocanos in that year, only 88 were on the Ilocos Coast itself,” Xenos pointed out.

“Ilocanos have also migrated to Manila and to more distant destinations, such as Mindanao, Hawaii, and California,” he added.

So, in 1969, when Marcos got his second term, he had a Solid North which actually became fluid, having already taken roots in other parts of the country.

Meanwhile, Osmeña’s Cebu bailiwick did not even deliver for him as he lost to Marcos in his home province.

Ben Luther Lucas, veteran non-governmental organization worker in the North and now a business advisor of Agriterra, said that the Solid North was part of Marcos’s plan.

“He was an ambitious politician who was even the first to become a political butterfly (he changed parties from Liberal to the Nacionalista) to further his cause. He had a decisive political trajectory and he was not afraid to mobilize his ethnicity to spread his influence,” Lucas said.

“He was said to have brought Ilocanos to the farthest parts of Mindanao for his grand ambition,” Lucas added.

Abelardo Cruz, former executive director of the Center for Nationalist Studies and now an NGO consultant in the Mekong River area, said that when the Ilocanos went into their frontier areas outside Ilocos, they brought not only their knowledge in agriculture but also the Ilocos-style politics.

“The Ilocos Coast is a narrow coastal strip. The only large area is Pangasinan and the Ilocanos have occupied Urdaneta upward already. Even before that, they have gone to Cagayan and Isabela,” Cruz said.

“Because of its narrowness, Ilocos has to open up and that means building roads and waterways. So the roads were built and Magat Dam and Pantabangan Dam were made by Marcos to irrigate the frontier areas,” he said.

Then these were followed by the wave of Chinese mestizos like Dys and Lims, who controlled the logging. Most of their workers were also from Ilocos and Pangasinan, Cruz said.

At the apex of the Solid North, Cordillera was not even a region. It was divided then, belonging to either Region I (Abra, Mountain Province, Benguet, and Baguio City) and Region II (Ifugao and Kalinga-Apayao).

Anthropologist Joanna Cariño, who was a teacher during Martial Law, said she was not even aware of the Solid North.

“What I know is that Marcos Ilocano cronies were lapping up huge contracts to destroy Cordillera. Herminio Disini of Ilocos Sur was awarded 200,000 hectares of upland Abra, Apayao, and Mountain Province to manufacture rayon and kraft paper,” Cariño said.

Another was to create the Chico River Dam, which would have been the third dam to help Ilocano farmers.

Cariño said the catchment area of the planned Chico Dam was from the headwaters of Mt. Data down to Dam 4 at Tomiangan, Kalinga, or a total of 1,400 square kilometers.

The watershed would have affected 10 towns in Kalinga and Mountain Province.

From 1973 to 1978, Cordillera elders held multi-party peace pacts to fight the construction of these two projects.

Cariño said the communist New People’s Army (NPA) was able to recruit many villagers in these areas. The government responded with militarization and hamletting. The culmination of this was the murder of anti-Chico dam leader Macli-ing Dulag on April 24, 1980.

She said that one good thing coming from this was the Cordillera’s quest for autonomy, which was enshrined in the 1986 Constitution.

In 1985, representatives Jess Paredes of Ifugao and Honorato Aquino of Baguio filed for the regionalization of Cordillera.

After the fall of the Marcos dictatorship, President Corazon Aquino signed on July 15, 1987, Executive Order 220, creating the Cordillera Administrative Region.

In 1990 and 1998, the plebiscites creating the Cordillera Autonomous Region lost.

Since then, Cordillera congressmen have not been able to pass the organic bill until late May 2022, when House Bill 5687 was passed on the third reading.

If a plebiscite is set, it would give activists like Cariño a chance to debate the complexities of regional autonomy.

But this could be an uphill climb. Senatorial topnotcher Robin Padilla is now head of the constitutional amendment committee, favoring federalization, which would be at odds with the Cordillera. Padilla has been saying that he descended from the Ibaloy Cariños to which Joanna belongs.

President Rodrigo Duterte also allowed the building of the Chico River Dam starting in May 2020, renaming it the Chico River Irrigation Pump Project. It is part of the $1.1 billion loan commitment of China to the Philippines. The project alone will cost P4.37 billion, partly financed by China Eximbank with a loan of P3.6 billion.

When the project was inaugurated in 2019, the National Irrigation Administration said it would increase rice production in Kalinga to 36,000 metric tons of rice, benefiting 4,000 rice farmers. It is supposed to be finished in 2022.

One of the most engaging Youtube shows was shown in December 2021, featuring a young man talking to his grandmother in Ilocano. Only, they were in Sultan Kudarat.

The old woman recalled her part in the Ilocano diaspora, going to Mindanao on a boat from Tarlac, which was already an extension of Ilocos at that time.

She spoke about her frontier life and how she struggled with malaria and other tropical diseases, and about the Japanese forces that invaded them.

The video has garnered 150,000 views and earned 1,000 comments, all from Ilocanos sharing their collective experiences as Ilocanos in a strange town.

Like Narra, which is considered the Rice Granary of Palawan, the towns where the Ilocanos settled – like Tacurong, Tagum City, Kabacan, and many others – became progressive towns because of the unity of the Ilocanos in lending a hand to each other.

Watching the video indeed showed the solidarity of Ilocanos in Sultan Kudarat during hard times.

This is what Bongbong Marcos referred to in 2016 as part of the Little Solid South. It is composed mostly of towns in North Cotabato, particularly Makilala, Kidapawan, Matalam, Kabacan and Midsayap – the towns where the Ilocano migrants settled.

Kabacan, for example, is said to be 65% of Ilocano heritage.

“We are already here in Mindanao, in the South, but I still feel the presence of the Solid North,” said Marcos in 2016.

Anthropologist Arnold Molina Azurin said that the Solid North may be about vote manipulation and the 3Gs.

“But there is a better wall of appreciation of the Solid North mentality as a cultural survival kit pioneered by migrating and evacuating Ilocano clans far from their homelands,” he said.

“The first farmers brought by the friars and colonialists in Mindanao and Palawan were Ilocanos who were hardy farmers,” he said. “Most important for them was the solidarity in developing their communities and sharing whatever they had during the very lean times. This cultural livelihood solidarity was the Ilocanos’ survival system,” he said.

Molina said that this even became evident among the Ilocanos in Hawaii, California, and Alaska, where they worked as farmers and laborers.

“The Solid North is a very reliable way of maintaining pioneer communities,” he said. – Rappler.com

This series was made possible by Internews.