Facebook Twitter Copy URL
Copied
'Duterte put us on a slippery slope to authoritarianism.... We have a long way to go in getting back on track,' says Christian Monsod, among the framers of the 1987 Constitution

MANILA, Philippines – Mariza Hamoy has already lost the criminal cases she filed against the police officers who killed her 17-year-old son Darwin in 2016. As President Rodrigo Duterte winds down his term, he dealt the Hamoys another blow: Malacañang absolved the station commander of Darwin’s killers from administrative charges.

“Being a public officer, Police Colonel Lito Patay has in his favor the presumption of regularity in the performance of official duties,” said Executive Secretary Salvador Medialdea in a decision dated May 25.

Mariza claims Darwin was just drinking with his buddies on the night of August 15, 2016, but cops stuck to their favorite narrative of nanlaban or resisting arrest with a gun. Darwin at the time just became a statistic in a very bloody drug war where numbers have risen to an estimated 27,000, according to human rights groups. Of that number, police killed 7,000, including Darwin.

When witnesses retreated in Darwin’s case – a pattern in drug war killings – criminal charges were junked, leaving Mariza with no more recourse, at least in the country.

“The worst act that [Duterte] did against the law is the operation tokhang, 27,000 poor, defenseless Filipinos were killed, can you just imagine, in an operation supposed to enforce the law? That’s the worst thing a president can do,” said retired Supreme Court senior associate justice Antonio Carpio.

The Duterte government, through the Department of Justice (DOJ), belatedly opened a review in 2020 but the panel, as of April, has forwarded only five cases for prosecution. More than 300 were opened for reinvestigation by the National Bureau of Investigation. The old Commission on Human Rights (CHR) slammed this as a superfluous process, some believing that a dead body is already a case ripe for the courts.

Justice Secretary Menardo Guevarra said that by allowing the review, “[Duterte] agreed with the view that it was not perfect, there were deficiencies, there were abuses in the conduct of the war against illegal drugs. In fairness to him, I think he understood.”

For Carpio, however, blood is on everyone’s hands.

“The failure of the justice system to stop the killing of over 27,000 defenseless, poor, helpless Filipinos, in an operation supposed to enforce the law – that is a failure, that’s the damage to our justice system,” said the former justice.

Carpio, the former member-in-charge of petitions to void the campaign against drugs, said that “the drug war was clearly unconstitutional.”

But five years and 27,000 dead bodies later, the Supreme Court is yet to resolve the cases. 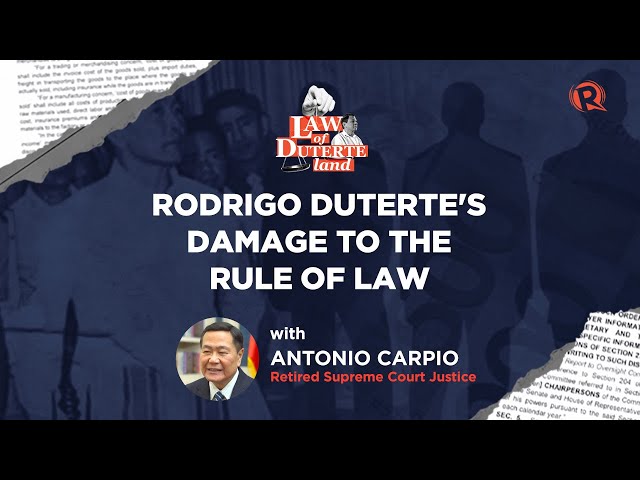 ‘SC went along with it’

Duterte leaves with the Supreme Court packed with his appointees, and according to University of the Philippines (UP) constitutional law professor Dan Gatmaytan, “He is the only president we’ve ever had who has never lost [in the Supreme Court] in the post-Marcos era.” Gatmaytan said it when the Supreme Court mooted petitions questioning Duterte’s unilateral withdrawal from the International Criminal Court.

“Duterte is always probing the boundaries of his powers and what he can and cannot do, and unfortunately for us, the Supreme Court went along with it on a few critical cases,” said Christian Monsod, one of the framers of the 1987 Constitution.

Monsod said the Supreme Court “abdicated its power given by the Constitution” when it allowed Duterte to declare martial law over Mindanao, and extend it beyond the constitutionally-prescribed 60 days. Martial law lasted in Mindanao for two-and-a-half years.

It was retired justice Francis Jardeleza who used the term “abdication of duty” when he dissented in the decision extending martial law, a change from his previous vote favoring the very first proclamation.

Senior Associate Justice Marvic Leonen, a dissenter in all Martial Law decisions, said the Supreme Court “provided the environment that enables the rise of an emboldened authoritarian.”

In many ways, the 1987 Constitution was a reaction to the repressive rule of the late dictator Ferdinand E. Marcos, father of incoming president Ferdinand “Bongbong” Marcos Jr., and a priority fix in the charter was to make sure martial law will not be abused again.

But what the Supreme Court did for Duterte, said Monsod, was “a bad precedent for the next administration because now martial law can be declared anywhere in the Philippines at any time, given the circumstances that allowed Duterte to extend martial law.”

We sought comment from the High Court but it has yet to respond. We will update this story once it does. 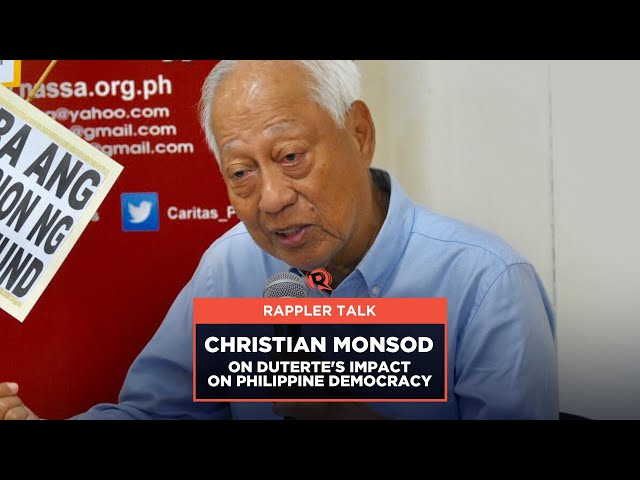 When more lawyers were being killed, the numbers rising to an unprecedented count (now at 66), the legal profession banded together to call on the Supreme Court for concrete actions. The last time that lawyers did that was during the presidency of Gloria Macapagal-Arroyo when they marched on EDSA, and law professors canceled classes so students can learn on the streets about justice.

When Duterte enacted the feared anti-terror law amid the pandemic in 2021, lawyers from left and center filed their respective petitions, making that legislation perhaps one of the most challenged in history. In the end, they lost.

That’s what makes Duterte worse than Arroyo, said Jobert Pahilga, a veteran lawyer for peasants and other grassroots organizers. What has kept Pahilga busy the last few years is defending organizers being arrested in Duterte’s war on dissent.

“Impunity is worse under the Duterte administration – even outside the war on drugs, red-tagging is done left and right, even if you are not an activist, just as long as you oppose a policy of the government, you are considered as a terrorist. This is much worse,” said Pahilga.

“Even the President was saying he does not care about human rights. Under the Duterte administration, so many activists were killed, subjected to trumped-up cases, and the Tinang arrest is the most number of arrests so far. This prevailing culture of impunity made the situation worse,” Pahilga said.

‘No check and balance’

Still, Duterte maintained his popularity ratings until the end, prompting reflections on Filipinos’ value systems if they approve of a President who casually says on the presidential podium, “Shoot them dead.”

What usually angers Filipinos is corruption, and Duterte was supposed to be investigated for alleged undeclared wealth. But the probe never pushed through because Duterte fired the lead investigator at the Office of the Ombudsman and undermined the former ombudsman Conchita Carpio-Morales. He bought himself precious time until Morales reached the age of retirement in 2018.

He appointed Samuel Martires, who had just retired from the Supreme Court at the time. Under Martires, the office stopped releasing Statements of Assets, Liabilities, and Net Worth (SALNs), allowing Duterte to keep his secret since 2018.

“That means that the checks and balance system is not working well,” said Monsod.

Martires also threatened journalists with jail time if they published stories about officials’ SALNs by including what he said, was commentary. Martires also sought to withdraw some cases at the Sandiganbayan, and filed much fewer charges, saying he was concerned with quality rather than quantity.

Rappler also reached out to the Office of the Ombudsman Public Information Bureau for a statement, but has not received a response. We will update this story once the Ombudsman responds. 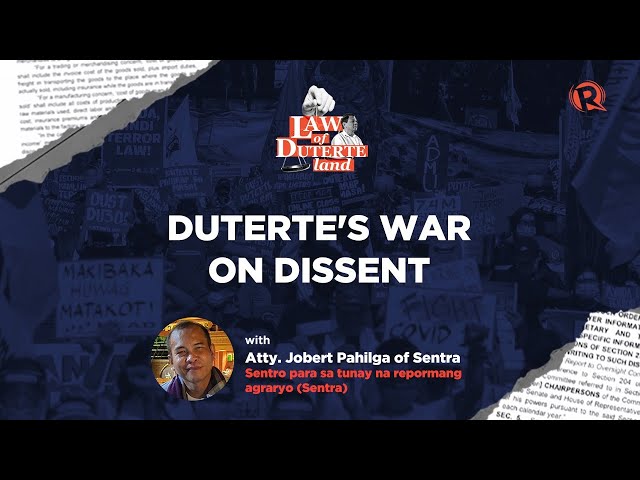 The Department of Justice (DOJ) often came to the rescue when Duterte issued questionable legal policies – for one, providing the backbone for an arbitrary order to rehaul back to jail prisoners who had already been granted freedom.

In the tumultuous years of the Duterte government, Guevarra became the face of the government’s legal policies. When Duterte wanted to jail staunch critic Antonio Trillanes IV, it wasn’t enough that his very loyal Solicitor General Jose Calida clinched a revocation of amnesty. Guevarra’s DOJ had to scramble for ways to send Trillanes to jail without a warrant.

Not succeeding with a warrantless arrest, Guevarra and his prosecutors went to court but failed to jail Trillanes. Years of demonizing the opposition, however, cost Trillanes his senatorial bid in 2022.

The attempt to jail Trillanes would become a template for warrantless arrests mostly for people who got on the nerves of Duterte – the doctor behind a dialysis center in the PhilHealth scandal, a teacher who supposedly tweeted a reward to kill him, and quarantine violators.

Guevarra said: “There is no judicial or legal system that is perfect.”

Guevarra will join the Marcos government as solicitor general, replacing Calida who used the OSG to run after perceived critics of the government.

“I intend to stick to the role of the OSG as the defender of the republic and tribune of the people,” said Guevarra.

Edre Olalia, president of National Union of Peoples’ Lawyers (NUPL), is cautiously optimistic that Guevarra will be “the conscience of the administration especially on matters of human rights.” Pahilga does not harbor illusions that Marcos will be different, saying, “He will just follow Duterte.”

“Duterte put us on a slippery slope to authoritarianism,” said Monsod, adding, “we have a long way to go in getting back on track.” – with reports from Pia Ranada/Rappler.com