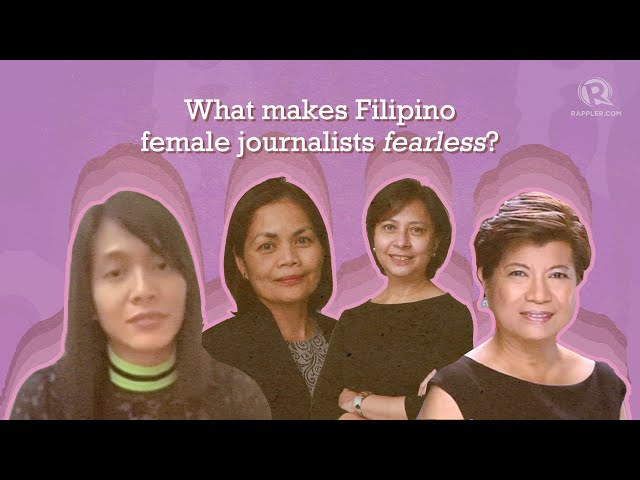 Facebook Twitter Copy URL
Copied
'The old belief that women will shirk and will retreat into not going, or not moving, forward is not true,' says veteran broadcast journalist Cheche Lazaro

Despite great strides in gender equality, many women continue to be forced into silence, repeatedly told: “Don’t do this, don’t sit like that, don’t dress that way, don’t say that out loud. Smile, be pleasant, don’t question.” Female journalists are trying to show the way for these women, as they continue to devote themselves to their profession amid the attendant risks, and occupy leadership positions in a field dominated by men.

As we celebrate Women’s Month this March, we put a spotlight on some of the Philippines’ fearless female journalists. Despite increasing attacks against women journalists globally, many Filipino female journalists continue to pursue stories that speak truth to power.

In the Nobel Peace Prize Ceremony watch party held last December 2021, four women talked about what it meant to be a female Filipino journalist. “I have seen how women are open to taking more risks,” said veteran broadcast journalist Cheche Lazaro. “The old belief that women will shirk and will retreat into not going, or not moving, forward is not true.”

Journalist Icy Salem said that there’s also a lot to be said about female journalists in leadership positions. Salem said that working with the International Association of Women in Radio and Television – an organization that aims to put more women leaders in the newsroom globally – showed her that in the Philippines, newsrooms were ahead of the game. The Philippines has shown that it is indeed possible to have numerous women leading newsrooms – a feat other countries are still trying to achieve.

Rappler executive editor Glenda Gloria also pointed out that often, people undermine Rappler because it is female-led. But after 10 years of operations and CEO Maria Ressa’s Nobel Peace Prize, “crisis has its own rewards…and if you fight back and try to protect your space, no matter how narrow that space is, it has its own rewards,” she said.

Rappler managing editor Chay Hofileña added that women are constantly being challenged and always have to prove themselves. This, for her, is the “inherent strength of women” which allows organizations like Rappler to not only survive a decade as an independent news organization but also excel on the global stage.

Show your support to Rappler, by joining Rappler+. Click on the JOIN RAPPLER+ button on the top right corner of this page or choose your preferred payment option below: