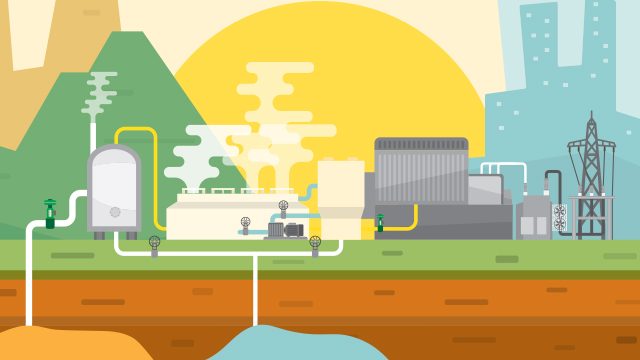 The following is the 44th in a series of excerpts from Kelvin Rodolfo’s ongoing book project “Tilting at the Monster of Morong: Forays Against the Bataan Nuclear Power Plant and Global Nuclear Energy.“

This is our last Foray!  Appropriately, we come full circle with a final plea that we abandon fruitless efforts to rely on nuclear power from foreign Uranium. Instead let’s import clean energy from beneath us, geothermal (“earth’s heat”) energy that lies abundantly there, especially under Mt. Natib and BNPP, of all places.

Why the Earth holds so much heat

Our planet formed about 4.5 billion years ago, from a cosmic cloud of gases and small and large chunks of rock, ice, and metal that gravity pulled together to collapse catastrophically around a common center:

Energy cannot be destroyed, only changed into different forms. This is why you would burn your fingers if you tried to pick up a bullet just after it hit a wall; its energy of motion was changed to heat when the wall stopped it.

Similarly, all of the energy of motion of the colliding pieces heated up the growing planet.  After about 500 million years the Earth was so hot its iron and nickel started melting, forming the orange blobs in the middle panel.  Being the densest planetary materials, the metals migrated to Earth’s center, forming its core. The energy of these motions generated even more heat.  Less dense materials, the black blobs, migrated up away from the center, eventually forming the mature Earth’s rocky mantle and outermost lithosphere (“rock sphere”) in the third panel.

Earth’s core is about as hot as the Sun’s surface, above 5,100°C.  Only about a fifth of the heat from the planet’s hot birth remains.  The other 80% has been produced over the last 4.5 billion years by radioactively-decaying Uranium 238 and 235, Thorium 232, and Potassium 40, even now at a rate of 30 trillion watts.  But only 82 milliwatts per square meter arrive at Earth’s surface, tiny (.24%) compared to the 340 watts per square meter it receives from the Sun.

Sunlight and the atmosphere and ocean control our comfortable Earth’s surface temperature, but its seasonal changes have no effect deeper than 10 to 20 meters, depending on the local soils and rocks.  The geothermal gradient is how temperatures rise with depth below Earth’s surface.  Under the surface layer that responds to the seasons, the rigid rock lithosphere extends down about 70 kilometers.  In it, temperatures rise fastest downward, about 25°C for every kilometer of depth.  The gradient is higher in volcanic areas like the Philippines, but abundant heat is available anywhere in the world, awaiting drilling technology that is developing rapidly.

First of all, geothermal energy is home-grown.  It emits no greenhouse CO2 and is available day and night, in windy weather and calm. It is flexible: at times when all the electricity sources are making too much to use, geothermal plants can simply reduce their output without wasting their heat sources.  They can even serve as batteries: use any excess electricity to pump brine down the well so it can absorb heat to use later.

And it is cheap!

It’s a bit cheaper than land-based wind. Only “standalone” solar – for immediate use without storage – is cheaper. Also note that the latest nuclear technology is twice as expensive.

There is a huge amount of geothermal heat.  At the rate humanity consumes it today, only 1% of what is in the uppermost 5 kilometers could provide all the world’s energy for 3,000 years.  The problem is how to go deep enough to tap it.

At present, the only geothermal electricity is being generated near volcanoes like those in the Philippines, but technologies to recover heat anywhere on Earth from greater depths are being developed.

Closed-Loop: Green Fire Energy Inc., a California corporation, has developed a heat exchanger consisting of a closed tube filled with a heat-absorbing fluid that is inserted in a well.  It absorbs deep heat and brings it up to a plant that uses it to make steam to run turbines.  Cooled, it flows back down to gather more heat.  In 2021 Green Fire was contracted to retrofit an idle well in the Mahanagdong geothermal facility in Leyte.

“Enhanced Geothermal Systems” borrow a method invented by the oil and gas industry called “hydrofracturing” or “fracking.”  Oil rigs drill down two kilometers or so, then drill horizontally similar distances through oil-rich rock.  Then a mixture of water, chemicals, and round sand grains is pumped down the well at such great pressure that it overcomes the weight of all that overlying rock and fractures the petroleum-bearing rock. Round sand grains roll into the fractures and hold them open so the oil and gas can leak into the well and be recovered.

In the same way, Enhanced Geothermal Systems drill as deep as 5 kilometers into hot, dry rock and pump water down at enormous pressures to fracture the deep rocks so the water can spread through them and absorb the heat, becoming steam piped back up to run electricity generators.  Fracking triggers earthquakes, so EGS may not have a good future.

The possibility of tapping the much greater temperatures at depth recently became a reality when the Massachusetts Institute of Technology developed gyrotrons that produce powerful millimeter-wave energy.  MIT spun off Quaise Energy Inc., which is collaborating with US government laboratories to extend conventionally-drilled wells by melting the rock with gyrotrons, taking only several months to go possibly as deep as 20 kilometers.

Volcanism brings geothermal heat much closer to the surface than most places. In 1969 we became a pioneering geothermal nation when the Tiwi plant in Albay province generated its first 2.5 kilowatts. By 2000, the Philippine 1,900-megawatt geothermal capacity was surpassed only by the US. In 2002, about 19% of the country’s electricity was geothermal. We were predicted to become the world’s largest generator of geothermal power by 2005.

In 2015 the Department of Energy was running the nation’s seven geothermal plants.   It was pursuing 22 other sites, but none of them has yet to open.

What happened?  We used to be second to the US in geothermal energy, but our production“flat-lined” and was overtaken by Indonesia in 2016.  At the rate Turkey is expanding its geothermal capacity, it will also soon surpass us.

One of the prospective Department of Energy geothermal sites in 2015 was Mount Natib. In 1991, JR Ruaya and CC Panem of the Philippine National Oil Company’s Energy Development Corporation studied the many thermal springs in Natib’s caldera. (Remember Foray 2?) They reported that subsurface temperatures were greater than 200°C; learning how great would require exploratory drilling.  The new technologies could tap Natib’s deeper heat sources to plug into BNPP’s turbines to make electricity to distribute using the facilities already in place.

As the new deep-penetrating technologies come on line, we should replace every coal-fired plant with geothermal, using their existing distribution infrastructures. Plants at Masinloc near Pinatubo and Batangas near Taal are obvious targets.

There you have it, folks; my Forays are complete.  God bless us all. – Rappler.com