Amid red-tagging, Robredo won’t ally with anyone using force to push agenda 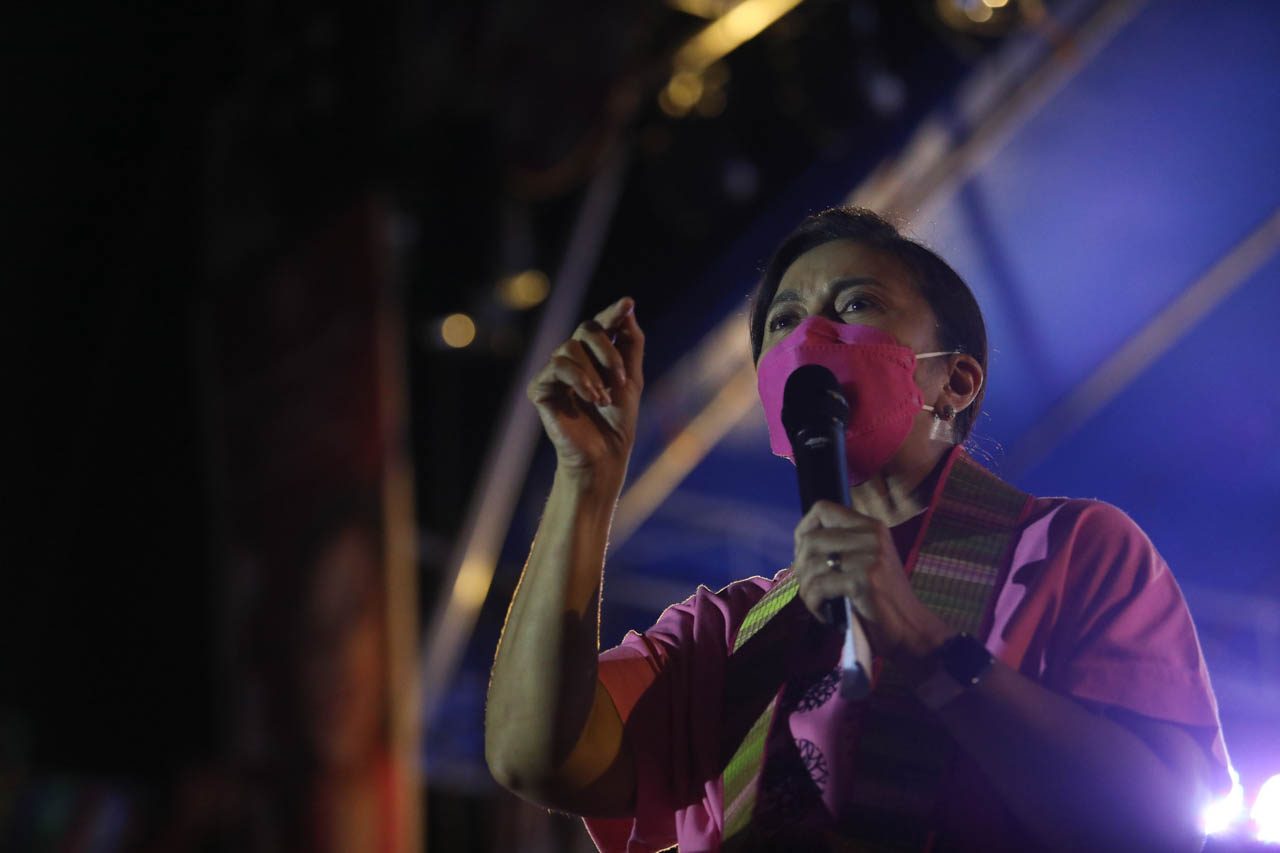 PALAWAN PEOPLE'S RALLY. Thousands of Palaweños stayed at the Puerto Princesa Baywalk Park despite the heavy downpour to hear from Vice President Leni Robredo in the event dubbed as “Paglaem: Palawan People’s Rally”. 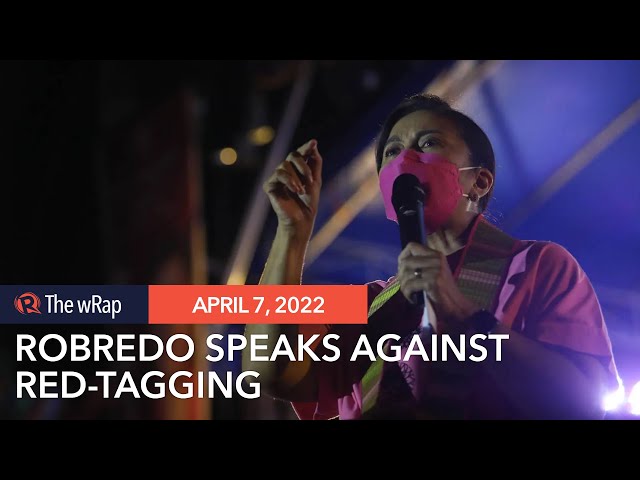 DAVAO CITY, Philippines – Presidential candidate and Vice President Leni Robredo reiterated she would not ally with anyone resorting to violence to advance their agenda amid critics’ relentless effort to red-tag her and her supporters.

In a statement on Thursday, April 7, Robredo said false accusations that people in her campaign allegedly work with communist rebels are meant to derail the momentum of her bottom-up, volunteer-led campaign for the 2022 polls.

(The motivation behind the persistent red-tagging against me and my volunteers is clear: It is to prevent the momentum of our People’s Campaign.)

Robredo issued the statement just a day after the latest Pulse Asia Research, Inc. survey showed she rose by nine points in March to 24%. Her camp sees the uptick as an indication that her campaign is gaining ground. Her rival, the late dictator’s son Ferdinand Marcos Jr., still leads at 56%, but that’s a four-point decrease from his numbers in February.

Several of her supporters have also filed complaints against Communications Undersecretary Lorraine Badoy for her serial red-tagging of Robredo. Badoy is the spokesperson of the National Task Force to End Local Communist Armed Conflict (NTF-ELCAC).

Robredo once said she would abolish the NTF-ECLAC if she becomes president, but she changed her tune months later. She now backs the NTF-ELCAC’s general mandate to combat the insurgency problem, but is against using the body to red-tag government critics. Some of her supporters have since been disappointed by her tempered position towards NTF-ELCAC.

Robredo’s spokesperson Barry Gutierrez told Rappler that Robredo’s statement on Thursday was meant to address “the continued red-tagging of the campaign and of volunteers, particularly on the ground.”

Former senator Antonio Trillanes IV, an ex-rebel soldier now seeking a Senate comeback under Robredo’s slate, earlier said the growing number of retired military and police  backing her presidential bid should disprove the red-tagging claims and other conspiracies theories being hurled at Robredo.

In her statement, Robredo recalled that the red-tagging of her campaign became even more pronounced after tens of thousands of her “Kakampink” supporters started showing up to her rallies.

Though she did not mention it directly in her statement, it was Cavite 8th District Representative Jesus Crispin Boying Remulla who first claimed that some attendees of her big rally in General Trias City were supposedly members of communist groups.

Senator Panfilo Lacson, one of Robredo’s rivals in the presidential race, then amplified Remulla’s claim in a tweet.

Robredo later called them out, saying red-tagging Caviteños was an “insult” to their province mates.

When Robredo went to Leyte in end-March, some streamers red-tagging her were also placed on trees and posts surrounding the Government Center in Palo. The posters were later taken down.

The Vice President and her camp continue to debunk the red-tagging claims. She then promised to protect her “Kakampinks” against the attacks.

(The entire campaign team and I, especially our volunteer lawyers, are ready to protect you against any harassment that might happen due to the widespread red-tagging of our volunteers.) – Rappler.com