Star power: Which local celebrities are endorsing which 2022 presidential candidates? MANILA, Philippines – In a country where politics and showbiz are often intertwined, entertainment figures have long played a vital role in the Philippines’ political scene.

We’ve seen our fair share of celebrities running for (and winning) seats in public office. But aside from these celebrities-turned-politicians, artists who do not seek positions in the government have also been vocal about their political beliefs, especially in recent years. (READ: The pros and cons of celebrities interviewing political candidates)

Given their huge followings, these showbiz personalities, whether through official endorsements or just voicing out their support on social media, can influence the public’s opinion on a certain candidate.

This upcoming 2022 national elections, many celebrities have already declared who they are going to vote for. Some have also joined campaign rallies or appeared in advertisements to show support for their chosen candidates.

Eat Bulaga hosts Jose Manalo and Wally Bayola have also performed at one of the tandem’s proclamation rallies.

Actress-host Toni Gonzaga is one of the UniTeam’s staunch supporters, having performed in several campaign sorties.

Karla Estrada, who filed a certificate as a nominee of party-list group Tingog Sinirangan, a group best known for voting to reject the renewal of ABS-CBN’s franchise, was also present at several UniTeam campaign rallies.

Other celebrities who have performed at the UniTeam’s campaign rallies include rapper Andrew E, and singers Randy Santiago, Isay Alvarez, Robert Seña, and Lyca Gairanod. Bands like Aegis, Silent Sanctuary, South Border, and Plethora were also among the performers.

Musician Freddie Aguilar, who sang at Rodrigo Duterte’s inauguration in 2016, has chosen to endorse Pacquiao. He was one of the performers at Pacquiao’s proclamation rally.

Among the presidential and vice-presidential candidates, it’s the Robredo-Pangilinan tandem that has arguably received the most endorsements from local celebrities.

As early as October 2021, when Robredo announced her bid for the presidency, many celebrities like Jim Paredes, Pokwang, Rita Avila, Lara Quigaman, and Enchong Dee have already expressed their support for the lone female candidate.

When campaign season officially began, many stars also joined Robredo and Pangilinan’s rallies across the country. A Facebook page called “Celebrities for Leni,” featuring artcards of showbiz personalities expressing why they’re voting for Leni, has even garnered 17,000 followers as of writing.

Pascual also made an appearance at the Robredo-Pangilinan send-off rally in Naga City on May 6. 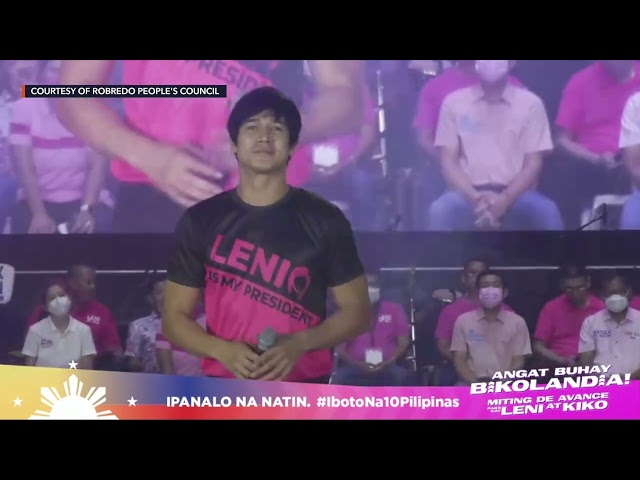 In a video posted online on April 25, “President” Nadine Lustre even bequeathed her position to Robredo, quipping, “C’mon guys, it’s 2022.”

Daniel Padilla was seen posing with a campaign poster of Robredo.

Pia Wurtzbach, who casted her vote through Overseas Absentee Voting, revealed on April 13 that she voted for Robredo. “I am even prouder to have voted for Leni to be our next President. I’m sharing this with you dahil naniniwala ako sa kakayahan ng isang babae (because I believe in the capabilities of a woman),” she wrote.

Veteran actress Boots Anson-Roa voiced her support for Robredo as she reminded the youth that the Martial Law years were not “the golden years” as many have been led to believe. She said that the future we are dreaming of is possible with a leader who is wise and honest.

Jennylyn Mercado and Dennis Trillo pledged their support for Robredo just a few days after the birth of their baby girl, with Mercado saying that they are choosing the candidate for their daughter’s future.

Ivana Alawi showed her support for Robredo on Instagram.

Are there any celebrity endorsers we’ve missed? Let us know in the comments section! – Rappler.com