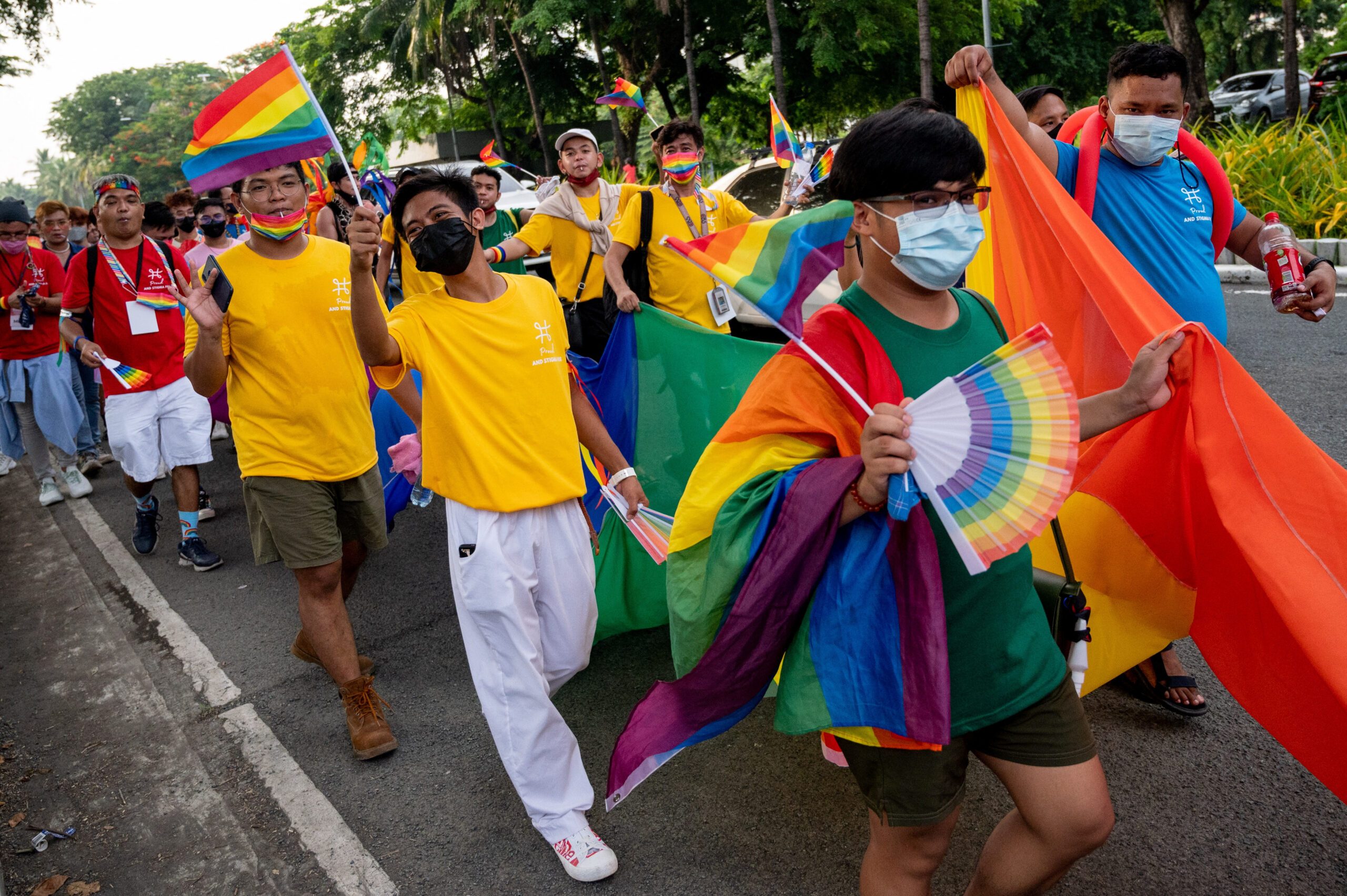 Facebook Twitter Copy URL
Copied
Local governments from Luzon, Visayas, and Mindanao have passed anti-discrimination ordinances aiming to shield the LGBTQ+ community from abuse. Here are some of them.

MANILA, Philippines – As in past sessions, the 18th Congress came to a close without passing the SOGIE (Sexual Orientation, Gender, Identity, and Expression) anti-discrimination bill.

Members of the LGBTQ+ (lesbian, gay, bisexual, transgender, queer+) community have been fighting for the passage of this bill, which would penalize discrimination based on any Filipino’s SOGIE. It has been repeatedly filed in Congress for over two decades. (TIMELINE: SOGIE equality in the Philippines)

The promise to protect the LGBTQ+ remains on paper, however, and the community continues to suffer hate crimes and abuse.

But while a national law has yet to be enacted, some local governments from across the country have passed ordinances that accomplishes the same goals as the proposed bill in Congress.

Quezon City passed its Gender-Fair Ordinance in November 2014. It bans discrimination against LGBTQ+ members in their workplaces and educational institutions, and in the delivery of goods and services.

Verbal and non-verbal harassment against LGBTQ+ persons is not allowed in the city.

Transgender woman Gretchen Custodio Diez was shocked when she was barred from entering a women’s restroom of a Cubao mall in August 2019. Here, she had an altercation with a janitress, and was later cuffed, arrested, and detained by cops. (READ: Trans woman Gretchen Diez: I didn’t think I’d be treated like a criminal)

In Ordinance No. 8695, discrimination is defined as “any distinction, exclusion, restriction, or other differential treatment that is directly or indirectly based on sexual orientation, gender identity and expression which has the intention or effect of nullifying or impairing the recognition, enjoyment or exercise on an equal footing of political, civil, economic, social, and cultural rights.”

Examples of banned acts of gender-based discrimination include denying or limiting employment opportunities, denying access to establishments, verbal or written insults, and physical and verbal harassment.

The ordinance also creates a Manila Gender Sensitivity and Development Council to handle harassment cases and recommend anti-discrimination policies to the city council.

“I’m so proud of Bataan for many things, but I am even prouder of my province after learning that the Sangguniang Panlalawigan of Bataan has passed an ordinance prohibiting discrimination on the basis of Sexual Orientation, Gender Identity and Expression,” said Bataan 1st District Representative Roman in a Facebook post.

Roman said the achievement must be seen as a challenge for Congress to pass the national SOGIE bill.

The LGBTQ+ community in Cebu celebrated the Pride Month of 2022 with a victory: the Cebu City council’s unanimous passage of the Sexual Orientation, Gender Identity and Expression, and Sex Characteristics (SOGIESC) Equality ordinance.

Cebu City actually had an Anti-Discrimination Ordinance in 2012, but advocates said it was not effective in upholding the sector’s rights. Magdalena Robinson, founder of Cebu United Rainbow LGBT Sector (CURLS), said that parts of the ADO were too generic and led to loopholes in enforcement.

Offenders can face jail time of up to 30 days. During Iloilo City’s Pride March on June 25, 2022, advocates continued the call for better implementation of the ordinance. Gabriel Felix Umadhay, lead convenor of the Iloilo LGBTQIA+ Network and head of the city’s Office of LGBT Affairs, said many government services remained “limited to cisgender persons.” In 2012, Davao City made illegal discrimination based on one’s sex, sexual orientation, and gender identity. People in Davao City could no longer refuse, based on SOGIE, someone’s employment application, a student’s admission, or requests to avail themselves of goods or services.

The ordinance prohibits acts which would “demean the dignity and self-respect of a person” and steps on their basic freedoms.

In October 2020, then-Zamboanga City mayor Beng Climaco approved Ordinance 543 or the Comprehensive Anti-Discrimination Ordinance. This not only penalizes discrimination against SOGIE, but also other sectors prone to marginalization.

The ordinance is meant to protect discrimination on the basis of:

President Ferdinand Marcos Jr. has yet to express enthusiasm to push for a national anti-discrimination law. Will the Philippines join other countries – such as Taiwan, France, and Canada – in passing national legislation to shield the LGBTQ+ community from abuse? – with reports from Rambo Talabong, John Sitchon, ​​Joseph B.A. Marzan/Rappler.com