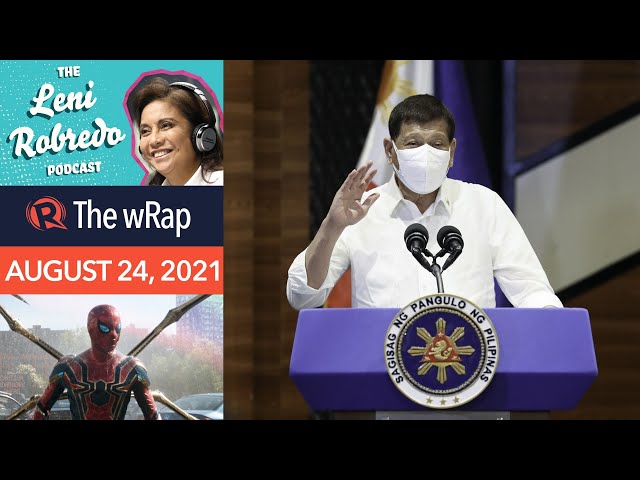 President Rodrigo Duterte accepts the nomination of his party PDP-Laban to run for Vice President in the 2022 elections.

Presidential spokesman Harry Roque on Tuesday, August 24, cites the COVID-19 economic downturn as a reason why the government’s anti-insurgency task force should get a P28.1 billion budget in 2022.

A little over a month before the filing of candidacies for the 2022 elections, Vice President Leni Robredo on Monday, August 23, launches a podcast to show what she considers a more candid and relatable side of her.

Sony officially releases the first teaser trailer for Spider-Man: No Way Home, the third Spider-Man film in the Marvel Cinematic Universe. Tom Holland reprises his role as Spider-Man, and so does Benedict Cumberbatch as Doctor Strange.

Folk band Ben&Ben reunites with pop group SB19 for another musical collaboration. The song featuring SB19 will be the sixth and final collaboration of Ben&Ben for their upcoming sophomore album Pebble House Vol.1 Kuwaderno. – Rappler.com