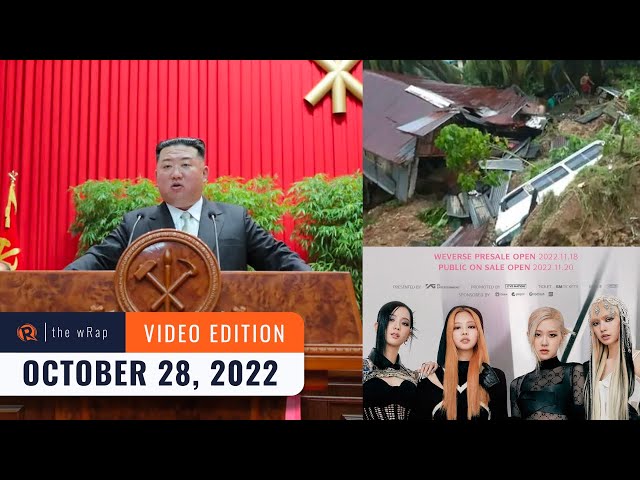 North Korea fires two short-range ballistic missiles or SRBMs off its east coast on Friday. South Korea’s Joint Chiefs of Staff says the SRBMs were fired from the Tongcheon area of the North’s Gangwon province.

Former president Rodrigo Duterte followed a playbook used by autocrats around the world to attack independent press in the Philippines.

Crash Landing On You couple Son Ye-jin and Hyun Bin shares their first baby is going to be a boy, and is due in December.

Stars of the sequel to Marvel’s Black Panther remember their late co-star Chadwick Boseman as they walk the red carpet at the ‘Wakanda Forever’ world premiere.

Time to feel the rhythm again, ReVeluvs! SM Entertainment confirms Red Velvet is making a ‘full-group comeback at the end of November.’

Mark your calendars, BLINKS! BLACKPINK’s Born Pink Philippines stop is set for March 25 and 26, 2023. Live Nation PH announces the show will be held at the Philippine Arena in Bulacan. — Rappler.com