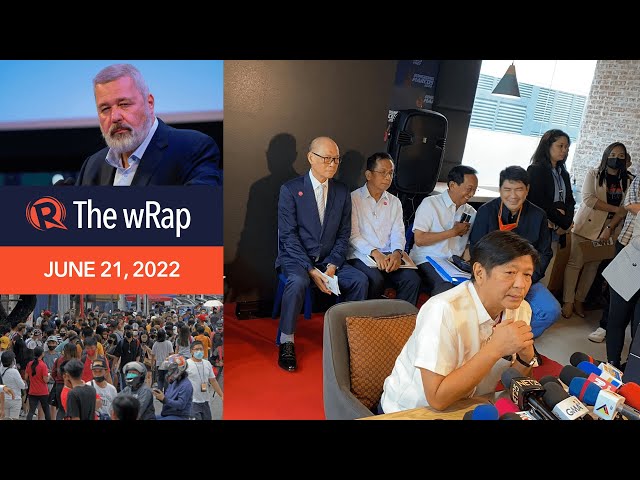 President-elect Ferdinand ‘Bongbong’ Marcos Jr. will be agriculture secretary ‘at least for now.’ He announces this on Monday, June 20, at his second press conference since winning the presidential elections.

A public health expert says the Philippines is at ‘the start of a new surge’ as the country logs an 82% increase in COVID-19 infections from June 13 to 19.

The education department is planning to ease physical distancing in classrooms for schools under Alert Level 1 by August, which is the start of the next school year.

2021 Nobel Peace Prize co-winner Dmitry Muratov auctions off his Nobel medal for $103.5 million to aid children displaced by the war in Ukraine.

K-pop boy group TXT or TOMORROW X TOGETHER is slated to hold their Act: Love Asia concert in Manila at the SM Mall of Asia Arena on October 15 and 16. In other news, Liza Soberano officially joins Careless Music, the record label and management agency founded by actor-singer James Reid. Meantime, Beyoncé drops her latest single ‘Break My Soul’ hours earlier than expected. – Rappler.com