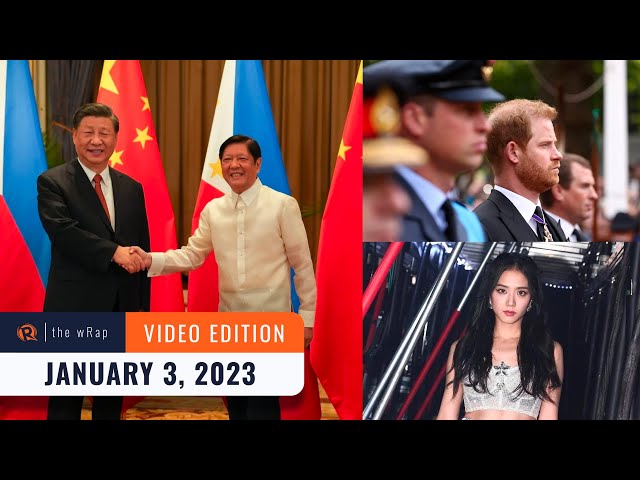 Today on Rappler – the latest in the Philippines and around the world:

Marcos orders PhilHealth to suspend rate hike in 2023, cites ‘socioeconomic challenges.’ The scheduled increase in the monthly contribution of PhilHealth members will not push through for now, following an order from President Ferdinand Marcos Jr.

UK’s Prince Harry: I want my father and brother back. Britain’s Prince Harry says his troubled relationship with the royal family “never needed to be this way.” In an excerpt from a TV interview, Harry says he wants to get his father King Charles and his brother William “back.”

Fans and supporters delighted to see Kris Aquino ‘looking well’. In an Instagram post on January 3, Batangas Vice Governor Mark Leviste shares a series of photos with Kris, who spent New Year’s Day with him in California, USA – prompting comments from well-wishers who noted that she’s looking better.

Jeremy Renner, Marvel’s Hawkeye, has surgery after snow plow accident. Actor Jeremy Renner is in a critical but stable condition after suffering a traumatic injury while plowing snow on New Year’s Day.

Finally! BLACKPINK’s Jisoo to make solo debut in 2023. This is it, BLINKs: Jisoo of South Korean girl group BLACKPINK is set to debut as a solo artist. – Rappler.com