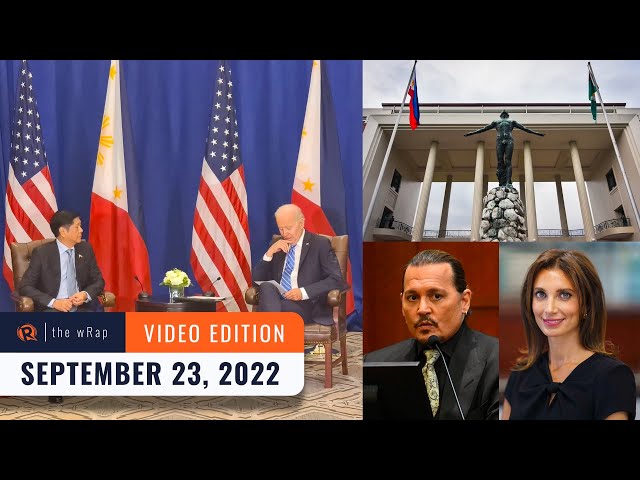 Philippine President Ferdinand Marcos Jr. and US President Joe Biden meet on the sidelines of the United Nations General Assembly.

A post has been circulating on Facebook and Twitter that attendees of the United Nations General Assembly walked out on President Ferdinand Marcos Jr.’s speech. This is FALSE.

The University of the Philippines announces its college admission test will resume for the academic year 2024-2025.

Japanese Prime Minister Fumio Kishida says his country will ease COVID-19 border controls in October. Individual tourism and visa-waiver travel of people from certain countries are now allowed as long as they are vaccinated.

Actor Johnny Depp is reportedly in a relationship with trial lawyer Joelle Rich, according to E! News and PEOPLE.

Myanmar beauty queen Han Lay is denied entry into Thailand. Han Lay gained public interest when she delivered a speech during a pageant calling for help for Myanmar and criticizing its military crackdown.

The rivalry between tennis legends Roger Federer and Rafa Nadal takes a bittersweet turn. Nadal will be alongside Federer for a final doubles match on the opening day of the Laver Cup at London’s O2 Arena. — Rappler.com