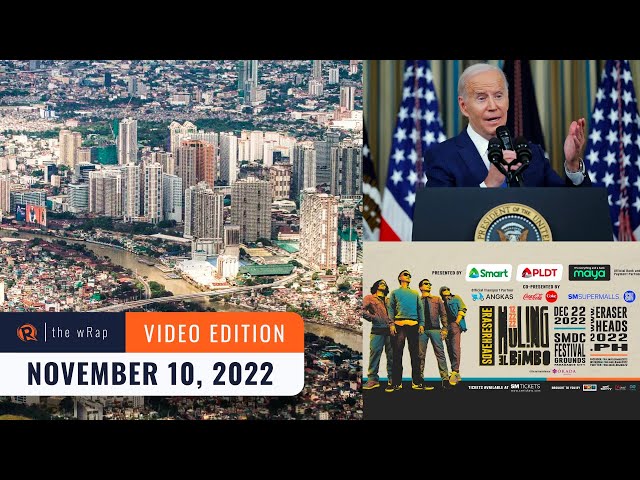 The Philippines’ gross domestic product grows at a faster-than-expected rate of 7.6% in the third quarter of 2022.

President Ferdinand Marcos Jr. is set to meet with his counterparts from Canada and France on the sidelines of the Association of Southeast Asian Nations Summit in Cambodia.

Nearly 1,500 families flee to safer ground as fighting between government forces and the Moro Islamic Liberation Front in Basilan escalates.

A man is detained after eggs were thrown at King Charles and Queen consort Camilla as they attended an engagement in northern England, Wednesday, November 9.

US President Joe Biden vows to work with Republicans and says he understands voters are frustrated. US Senate control hangs in the balance while Republicans move closer to securing a majority in the House of Representatives.

American singer-songwriter Conan Gray is bringing his Superache tour to the Philippines. Concert organizer Live Nation Philippines announces Conan will be performing at the Mall of Asia Arena on February 18, 2023.

More tickets to the Eraserheads Reunion Concert in December are now up for grabs! Producers expand seating sections and add a general admission section in response to the continued demand from fans. — Rappler.com