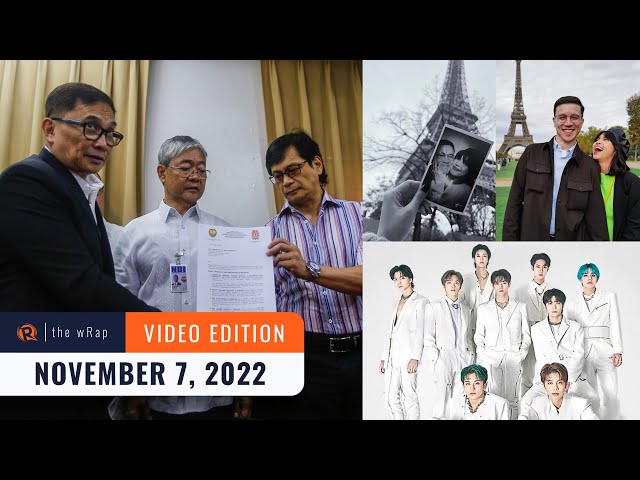 The Philippine National Police and the National Bureau of Investigation file separate murder complaints against suspended Bureau of Corrections chief Gerald Bantag and 11 other individuals, for the deaths of hard-hitting broadcaster Percy Lapid and alleged middleman Jun Villamor.

One teacher died and over 20 others were injured when a bus carrying teachers from Quezon City had a brake malfunction and fell into a ravine in Orani, Bataan, on Saturday, November 5.

Twitter updates its app in Apple’s App Store to begin charging $8 for blue checks or verification marks. The change comes a week after billionaire Elon Musk takes over Twitter.

K-pop boy group STRAY KIDS announces it will be bringing its MANIAC world tour to the Philippines. The group is set to hold a two-night show on March 11 and 12, 2023 at the Mall of Asia Arena.

K-pop boy band NCT 127 cuts short its November 4 concert in Jakarta, Indonesia as 30 fans faint at the event while trying to get close to the stage. — Rappler.com