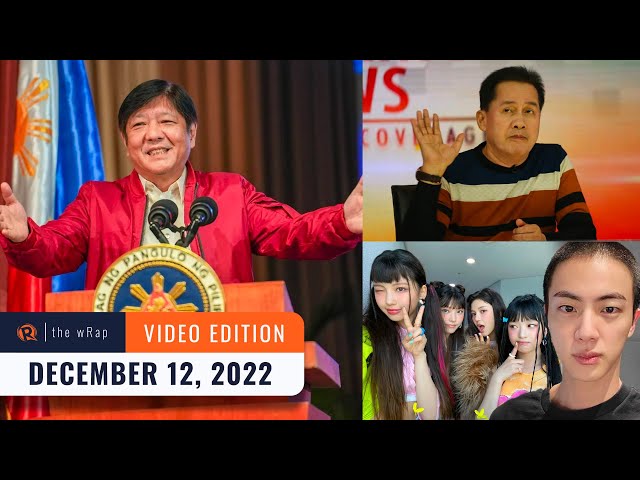 President Ferdinand Marcos Jr. speaks up on the Maharlika Wealth Fund, saying the controversial proposal is advantageous to the Philippines.

The United States imposes sanctions on more than 40 individuals across nine countries, including self-styled pastor Apollo Quiboloy, who is wanted in the U.S. for corruption and human rights abuses.

P&G Philippines recalls its Sangobion Kids supplement. P&G says it is a precautionary measure after it learned the food supplement may contain ‘ethylene glycol above the allowable limits in raw material.’

In a unanimous decision, the University of the Philippines Board of Regents names former regent and lawyer Angelo Jimenez the new president of the country’s premier state university.

Notable names from the LGBTQ+ community grace the second edition of Vice Ganda’s UnkabogaBALL party on Sunday, December 10, in Cebu.

Jin of K-pop sensation BTS shows off his new look with shaved hair, ahead of his upcoming military enlistment. Meantime, rookie South Korean girl group NewJeans releases the teasers for their first comeback.