Pandemic in 2021: How the Philippines responded to COVID-19 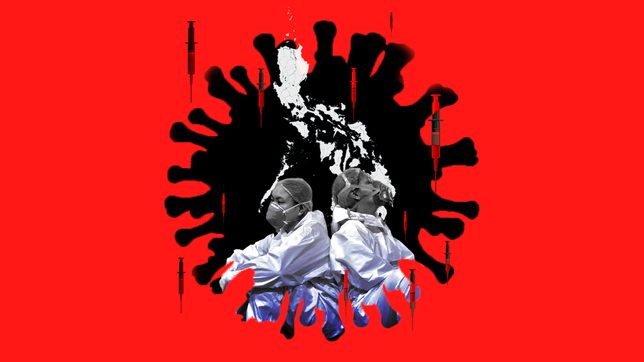 Facebook Twitter Copy URL
Copied
Here are the things that happened in the Philippines as it grappled with the pandemic in 2021 – from the things we learned about COVID-19, to the way the Duterte government handled the crisis

The second year of the coronavirus pandemic in the Philippines was, in a number of ways, similar to the first.

Lockdowns remained for the most part of the year as two waves of COVID-19 ravaged the country. While several millions of Filipinos were able to get vaccinated throughout the year, experts flagged the vaccination campaign’s sluggish pace.

In the middle of it all, lawmakers investigated alleged anomalies involving billions of pesos in the Duterte administration’s pandemic contracts. These were probed in marathon Senate hearings that went on for months on end.

It was not until the latter part of the year until new daily coronavirus cases were reported only in the hundreds, restrictions were eased, and mandatory face shield policies were dropped – finally giving some kind of sense that, perhaps, the Philippines was getting out of the woods. (READ: Does wearing a face shield protect against COVID-19?)

While the holidays may be looking up for many Filipinos, the threat of a new variant of concern looms, and experts say that there is still a need to practice “risk-based” decisions when choosing activities and engagements despite the relatively low cases.

Here’s a list of stories reviewing what happened during the COVID-19 pandemic in 2021.

As the Philippines’ vaccination campaign began in March, one of the government’s main goals was to get as many Filipinos vaccinated. We monitored the arrival and rollout of the vaccines in these trackers, as well as where COVID-19 cases were most prevalent. We also chronicle the significant events in the pandemic in a running timeline.

Things we learned about COVID-19

These stories and explainers explore new information about the virus as they came.

Why did we need to pay attention to the virus when it mutated?

How did the public and health experts tackle the ivermectin debate, when it was floated as a possible alternative treatment to COVID-19?

How did we learn to understand the dynamics of new variants and vaccines, and was herd immunity the only goal?

Two deadly surges took an unprecedented toll on health workers employed in a healthcare system which had problems spilling over from before the pandemic began.

The release to workers of their benefits mandated by law was also a rocky discussion as the Department of Health’s spending was put under scrutiny.

The pandemic response of President Rodrigo Duterte was not without criticism on matters of public health policy, public funds management, and governance.

The health crisis coincided with an economic crisis that was experienced locally and globally. Here’s what it was like for Filipinos in 2021.

The Philippines recorded millions of positive cases and tens of thousands dead – with more added to the health department’s daily tally. These are stories of people behind the numbers, as well as how Filipinos in the country and abroad banded together in times of crisis.

As Filipinos struggled to survive, lawmakers investigated allegations of misspending in the government’s pandemic funds. These anomalies, which sprung from irregularities found by the Commission on Audit, had ties to the President himself.